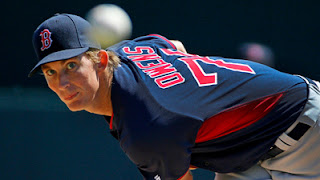 The Red Sox open up their final series of the season in Cleveland tonight, and if they sweep the Tribe, they will finish the season at exactly .500. They've played .585 baseball since August 2nd, which is the third best percentage in the AL and in the same time period have scored the 3rd most runs in the entire league. As disappointing as the first few months were for the team, the team has battled back to salvage a respectable season. They will have Henry Owens (4-3 3.84) making his final start of his rookie season tonight and will be going up against an Indians team that hung around the Wild Card race much longer than people expected them to.

The Indians will counter with Josh Tomlin (6-2 3.03) who is coming off his worst start since returning from the DL, giving up 5 runs in 3 2/3 innings. Tomlin has only made 9 starts since returning from shoulder surgery and the team didn't have as much success from their rotation this year compared to last. In his career, Tomlin hasn't had much success against the Red Sox, going 1-2 with an ERA of 6.67 in 5 games, 4 of them being starts. The Indians have currently lost 4 of their last 5 games and are also trying to salvage a .500 record.