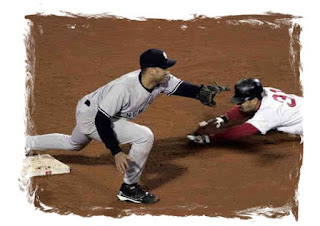 Who in Red Sox Nation does not know who it was that turned the ship around in the 2004 ALCS?

The New York Yankees were three outs away in the top of the ninth inning from eliminating the Red Sox in a sweep of the 2004 ALCS.

Kevin Millar drew a leadoff walk from legendary closer Mariano Rivera and was pinch-run for by Dave Roberts. Roberts stole second base and scored on a single up the middle, tying the game 4-4.

The Red Sox went on to win 6-4 in 12 innings to continue on to be the first team in major league history to overcome a 3-0 deficit in a postseason game.

Today it was reported on mlb.com that the same Dave Roberts who crushed Yankees fans dreams in 2004 will be the new manager of the Dodgers.

He was considered a long shot until he interviewed, reportedly dazzling the management team enough to blow out the other candidates. The Dodgers are planning to hold a press conference on December 1st at Dodger Stadium to introduce Roberts.

"It's hard for me to put into words what it means to be named manager of the Los Angeles Dodgers," Roberts said. "This is truly the opportunity of a lifetime. The Dodgers are the ground-breaking franchise of Jackie Robinson, Roy Campanella, Sandy Koufax, Maury Wills, Fernando Valenzuela and Hideo Nomo. When I put on this uniform as a player, I understood the special responsibility to honor those that played before me as well as the amazing bond between the Dodgers and their fans. I feel that I have now come full circle in my career and there is plenty of unfinished business left in L.A."

There are some interesting notes around this hiring by the Dodgers, but really what matters is that Roberts stole not only a base in the 2004 ALCS, he stole a place in our hearts.