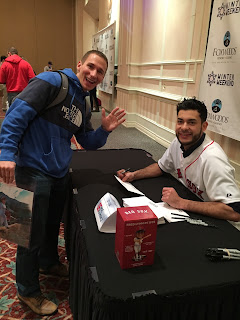 When tickets were released for the 2nd annual Red Sox Winter Weekend, I balked at the price. $60 a person is a lot of money for a guy with a young family. But as I looked over the list of attendees, I felt like I couldn't pass up the opportunity to see Wade Boggs, Roger Clemens, Pedro Martinez, Dustin Pedroia and Xander Bogaerts all under one roof! So I packed up on a Friday night and went with my die-hard Red Sox fan (my younger brother) for the hour trip to Foxwoods. And it didn't disappoint.

We went to the 5th Annual Town Hall meeting, which was essentially a 1 1/2 hour show where the front office answered questions from young fans whose dads made them stand up and ask something so they would get on television. Most questions were easy like "what is your favorite movie" to "Why do you like working for the Red Sox?" The only memorable moment was when Wade Boggs walked out on stage to thunderous applause and Brock Holt met him there to give him his number 26 jersey. Boggs was holding back tears and mentioned that that very moment was the best of his career. Cool stuff.

After the Town Hall, my brother and I looked around for a place to eat. When you are in a casino, and it's Red Sox weekend, you have got to keep you head up for fear that you might miss someone walking by. We were lucky enough to cross paths with Christian Vazquez, Rusney Castillo, Xander Bogaerts and Hanley Ramirez. They were all playing roulette and some were dropping stacks like it was monopoly money. All were in good moods though and truly looked like they enjoyed each other's company.

When my brother finally got around to picking a place to eat, we were both shocked to see my childhood idol, Wade Boggs, sitting at the corner of the bar with his group of friends. I waited for the moment to be right, and then I quietly told him I was a huge fan. He smiled and said thanks. All his friends then, who were fully imbibed, started to talk to me. For about 10 minutes, I was in the Boggs entourage. I found out about why he was blackballed from Boston until this year, what growing his beard meant, and got caught up in many stories about a legendary ballplayer. A cool moment I will never forget.

My brother and I got home around 1am, then woke up early the next day to do it all over again. We left as the snow began to come down, and by the time we reached Norwich, it was nearly a whiteout. But we made it!

Saturday is a lot more structured and has so much more to do. Just walking around the lobby, we ran into at least ten or more of the players, and because it's their off season, they are healthy and are all excited to meet their fans. With each admission ticket, you get to pick a time and a room to meet a player and take a picture with another. This year, I randomly drew Noe Ramirez and Brock Holt. Not worth the hefty price tag, but both men were as happy as could be, and when I asked Holt to show me how strong he was, he was happy to oblige.
Not only were there places to get autographs and meet players, but there were other rooms filled for kids; a small whiffle ball stadium, pitching machines, a timed run to first base, and a bunch of Cy Young awards and MVP trophies for your viewing pleasure. 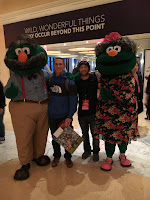 In the back, they even offered "breakout sessions" where they held question and answer style classes where players like Jason Varitek and Pedro Martinez schooled you on what it was like to play together. The end of the day even brought a game show where the players had dance offs and trivia competitions against the coaches.

And if you were tired of running around, you could sit in the main area and watch Wally and his sister Tessie posing with balloon animals, Big League Brian on stilts and face painters galore. This was Disney world for Red Sox fans, and while I was happy to attend, it just made me miss the green grass and the sun on my back that much more. I can't wait for April in Boston.......