Red Sox Take Over on Snapchat 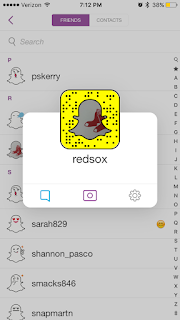 Baseball is officially back, and with it comes an insider access to the Red Sox team that has never been seen before. Owners of a smartphone can now download an app, Snapchat, and add the Boston Red Sox as one of their friends. The way snapchat works is quite simple, people take a picture or video of themselves and send it to their friends, or post it for their friends to see. The images they post for their friends to see last 24 hours, and the videos are no longer than 10 seconds. While this is great if you want to send a friend a silly picture, this is even better when you want to get insider access to the Red Sox organization.

The Red Sox started showing off on Snapchat when down at spring training, giving quick peaks at the players at workouts, and in locations where the public can't access. The real treat was during photo day, when many players took aim not only in front of the cameras for their official season photos, but also took selfies using the filters that snapchat provides to give themselves a unique look. Check out a quick video below that had clipped some of the players on Snapchat that the Red Sox tweeted out.


We documented #PhotoDay with the help of a few selfies on Snapchat! Watch the Snap Story before it's gone: RedSox 📸https://t.co/vrbPB7OxHw

If seeing the Sox in a different light is your sort of thing, make sure you find them on snapchat. And who know, you may even have a superstar and his dog to follow soon too.

I've never had #snapchat but I'm leaning that way! All those funny/weird faces are pretty cool..Astro could be a snapstar for sure