The Red Sox rallied back from 2-0 and 4-3 deficits to beat the Blue Jays 8-4 on Saturday afternoon at Rogers Centre.

It was an odd outing for Boston starting pitcher Rick Porcello. He struck out seven over six innings but had all kinds of trouble with Joey Bautista who lit him up for a pair of two-run home runs. 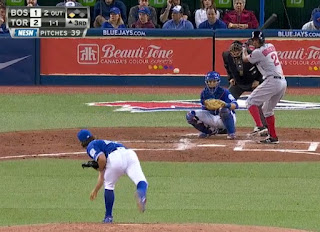 Toronto starter R.A. Dickey contributed to the Red Sox cause with a throwing error on a pickoff attempt in the third that put Boston runners on second and third. Dustin Pedroia drove in Rusney Castillo with an RBI groundout and Xander Bogaerts (pictured) doubled home Blake Swihart. Travis Shaw drove in Bogaerts with an RBI double.

Swihart drove in another run with sacrifice fly in the 4th and Boston added three more in the 5th on a 2-RBI triple by Hanley Ramirez that bounced over Bautista's head in right, and a passed ball by Toronto catcher Josh Thole.

Pedroia drove in another run with an RBI double in the 6th, one of his team-leading three hits in the game.

Once again, the bullpen came up big. Koji Uehara and Robbie Ross Jr combined for three scoreless innings to seal the win for Porcello.