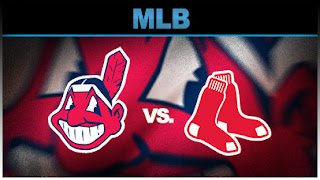 After a not-so-successful time in Kansas City (one rescheduled game due to rain and a series loss), the Boston Red Sox return home to take on the Cleveland Indians this weekend.

Clay Buchholz will start tonight's game for Boston (25-16), who are back in a virtual tie with Baltimore for first place in the AL East. Buchholz is 2-3 with a 6.11 ERA. The righty has allowed nine runs in his last two outings, but earned a win in both starts against Oakland and Houston. The Sox have won each of the last three starts by Buchholz after losing his first five starts. Buchholz claims to have figured it out, but that remains to be seen.

Cleveland (21-17), second in the AL Central, will have Corey Kluber on the mound to open the series. He hasn't looked like the pitcher who won the 2014 Cy Young Award. Kluber is 2-5 with a 4.30 ERA and has given up nine runs in his last two starts against Houston and Minnesota.

Here is the lineup for the Red Sox tonight (first pitch 7:10 pm EDT):

Going for the jersey number
Another day, another reminder that Jackie Bradley Jr. has continued his hitting streak. The streak is currently up to 24 games. Tonight, he looks to extend it to 25, the number on the back of his jersey.

Second time around
Both Buchholz and Kluber faced off against the opposition in the opening series of the season. Kluber allowed four runs on nine hits in 5.1 innings en route to a loss. Buchholz received a no-decision, giving up five runs on six hits in 4.0 innings in an eventual Indians win.

Roster moves
The Red Sox placed reliever Carson Smith on the 15-day DL with soreness in his elbow. It was discussed that Smith needed extra rest in between outings, but the DL stint seems like a chance for him to fully rest up. Brock Holt was also placed on the 7-day concussion DL. Holt is the only Red Sox regular batting below .260. Holt's average has dropped from .284 on May 7 to .239 presently, and he's hitting just .200 during May. Blake Swihart was recalled from Pawtucket and is getting the start tonight in left field. Reliever Noe Ramirez was also recalled and will fill in Smith's spot in the bullpen.