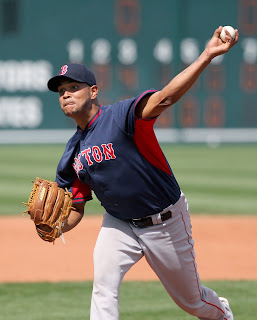 While most Sox fans were watching David Ortiz win yet another game for Boston yesterday, I unfortunately did not. Instead, I went on a "scouting" trip and watched the Triple A affiliate of the club. Here are my takeaways from the trip:

-Eduardo Rodriguez took the lost yesterday in a rehab start for the Pawtucket Red Sox. Rodriguez pitched 5.2 innings giving up 7 hits, 3 runs (2 earned), walking none, and striking out 3. Of the 7 hits, 3 went for extra bases (2 homers and a double).

While the numbers do not look too bad, Rodriguez was far from impressive yesterday. His fastball sat around 91 mph and did not blow anyone away. The two homers he gave up were well struck and hard contact was made numerous times throughout the afternoon. His "stuff" simply is not there yet. He still has a ways to go before he pitches again for the Boston Red Sox.

On the plus side, Rodriguez did have good command. He threw 100 pitches, 71 for strikes, and that is always a welcome sight. Rodriguez is scheduled to pitch again on Thursday for Pawtucket before the team makes any decisions on a potential call up.

-First baseman Sam Travis went 4-10 with 3 homers, 7 RBIs, and 2 walks this weekend. This kid is just 22 years old and is the real deal. He always has great at bats and has a good knowledge of the strike zone. He is not a power hitter, but can certainly drive the baseball. "Professional" is the best way to describe his approach. Drafted just 2 years ago, Travis has risen through the ranks and continues to mash at every level. He will be in Boston before you know it.

-Bryce Brentz (remember him?) made a spectacular catch in Game 2 of the doubleheader yesterday. He went 5-11 this weekend with 3 RBIs and 2 doubles. He is now hitting .261 for the PawSox in 7 games since returning from an oblique injury.


-Blake Swihart went 5-9 this weekend with 1 double and 3 walks. He is now hitting .250 for the PawSox this year. More importantly, Swihart only caught 1 game this weekend and it was Game 2 of the doubleheader on Saturday (traditionally, one catcher wouldn't catch both games anyways). He has now started 13 games at catcher and 9 games in left field for Pawtucket. Make of it what you will.

-Rusney Castillo had 4 hits in 9 at bats this weekend to go along with 3 RBIs, 1 double, 1 walk, and 4 runs scored. He is now hitting .273 on the year and .282 in hist last 10 games. Castillo looks like he is finally getting more comfortable in Triple A. Not sure it really matters though. He has really fallen out of the Sox plans and is now basically just a depth option.

-Marco Hernandez went 3-7 this weekend with 3 runs scored, 1 RBI, and 1 walk. Hernandez is hitting .333 for Pawtucket this year and is certain to be called up when the Sox expand the bench to 4 position players.

-Lastly, Brian Johnson and Henry Owens both turned in subpar performances this weekend. Johnson, despite getting the win, went just 5 innings and gave up 6 runs (5 earned). He also allowed 3 hits, walked 5 hitters, and served up a homer in Game 2 of the doubleheader Saturday. Johnson just did not have good command yesterday. He walked the first 3 hitters he faced and struggled with his control all day. Overall, he has a 4.64 ERA down in the minors and has done nothing to improve his own stock. The same goes for Owens as he got lit up today, but also recorded a win. He allowed 8 hits, 3 home runs, 7 runs, 2 walks, and had 5 strike outs. With Rodriguez and Joe Kelly presumably the next men up for the 5th spot in the rotation, it appears as if Henry Owens and Brian Johnson will be staying in Pawtucket for a while.

Thoughts on Rodriguez and any other PawSox?
Comment below or reach out to me on twitter @Ian_Vescera
Click here to read more posts by Ian Vescera.
Photo via mlbtraderumors.com
Stats via baseballreference.com