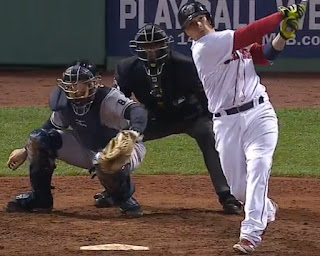 Christian Vazquez's (pictured) two-out, two-run blast off reliever Dellin Betances snapped a 6-6 tie and powered the Red Sox to an 8-7 win and a sweep of the three-game weekend series against the Yankees at Fenway Park.

David Price went seven innings in picking up his fourth win of the season, but it wasn't exactly pretty. He allowed six runs on eight hits and a walk while striking out three. He had particular trouble with Alex Rodriguez who touched him for a home run and a double, driving in four runs.

Dustin Pedroia and Xander Bogaerts each had three hits for Boston. Travis Shaw added two more including a two-run homer to right off starter Nathan Evoldi in the fifth that tied the game at six apiece.

The Boston win, combined with Sunday's loss by the Orioles, moved the Red Sox into first place in the American League East. It was the team's first series sweep of the Yankees since mid-September 2013.