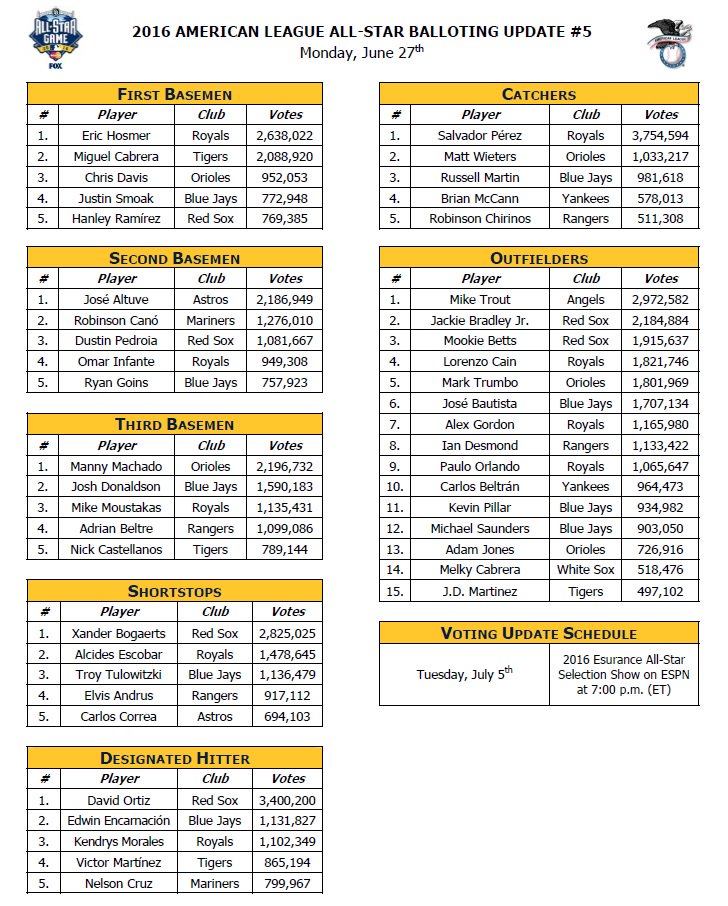 While Big Papi and Xander are all about guaranteed to start at this point, Mookie and JBJ have the Kansas City Royals Lorenzo Cain, the Baltimore Orioles Mark Trumbo and the Toronto Blue Jays Jose Bautista breathing down their necks. Expect the Red Sox to make a push for fans to get out and vote these next two days.

While prior to the season Jackie Bradley Jr. would have been the biggest surprise of the four Red Sox, he has led teammate Mookie Betts throughout all-star voting.  Betts is coming on strong though:


Betts has made the biggest surge in voting results, as he was as low as fifth in earlier updates. He held just a 30,000-vote lead over Baltimore Orioles slugger Mark Trumbo as of June 21 but now leads the Kansas City Royals’ Lorenzo Cain, who has jumped up to fourth, by nearly 100,000 votes. Betts has tallied nine hits in his last five games to raise his batting average to .293. He led all AL outfielders as of Monday with 65 runs scored.


The Red Sox had a shot coming into the season of having four position players as starters if the team won a lot early (which they did). Many people thought Dustin Pedroia would be one of the four, but he's over one million votes behind Jose Altuve at this point. The All-Star teams will be announced on Tuesday July 5th.

You can vote for your favorite Red Sox here: http://mlb.mlb.com/bos/fan_forum/all-star-ballot-offer/