Clay Must Go. The Question Is "How?" 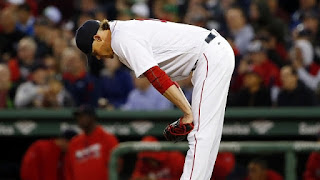 Enough with the teases...enough with the excuses (yesterday's was a doozy - "they were just hit where we weren’t")...just enough already.

The Red Sox have to part ways with Clay Buchholz. And they have to do it now.

Everyone knows it, too. The front office knows it, the fans are screaming for it. Even Clay has to admit that his time in Boston needs to come to an end.

The frustrating reality is that it may not even be possible right now.

Sunday's start against the Texas Rangers was more of what we've seen so far in 2016 - a horrible beginning (a 3-run first inning) followed by a few good innings and then the home run ball in the sixth that ended his afternoon. It was pretty much the same script we've seen all season with the exception of his May 4th performance against the White Sox (7 IP, 2R, 3H, 2BB, 6K).

And despite what we've seen this year, word is that Clay may indeed make his next start.

I have no idea what the mood in the clubhouse is when Clay's turn comes in the rotation, and I have no idea what his teammates are thinking as they watch six consecutive batters reach base as was the case in the first inning on Sunday in Texas.

But I do know this - Clay Buchholz can no longer pitch for the Boston Red Sox.

The options are limited. He could go back to the bullpen, but we've been there and done that and the T-shirt really wasn't much to write home about. Clay's trade value at this point is probably nil, unless Boston is willing to pick up the majority of his salary. Sending him back to Pawtucket at this stage of his career isn't going to happen. There's always the phantom injury route, sending him to the disabled list for a period of time. He can also be designated for assignment.

Further complicating the situation is the reality that there is no one - NO ONE - in the minor league system right now who is ready to take his place in the rotation. Anyone currently on the AAA roster isn't likely to give you anything more than what Buchholz is currently offering every fifth day.

This goes beyond the frustration of the fans who flood the call-in shows and/or use social media to slam Buchholz. You can see it in Clay's own body language when he's on the mound. Plain and simple - he's done. He's done with Boston, just as much as Boston is done with him.

The trade route is limited. Maybe the Red Sox can find someone on another team who needs a change of scenery and see if that team thinks it can fix Clay (good luck with that, by the way). Or they can go after someone like Chris Sale and hope they won't have to give up the likes of Mookie Betts, Jackie Bradley Jr., or some of the real jewels in the farm system like Yoan Moncada and Andrew Benintendi. We all understand that in order to get something the Red Sox will have to give up something. But to me, the thought of any of those players leaving Boston without an absolute blockbuster ace coming back is unacceptable. To mortgage what appears to be a bright future just to get Clay gone would be as foolish as the ill-advised decisions to bring Pablo Sandoval and Hanley Ramirez to Boston.

The reality is that barring some magic trick Dave Dombrowski has up his sleeve, we may be stuck with the enigma that is Clay Buchholz.