Gutsiest win of the year?

Dustin Pedroia's three-run home run with two outs in the top of the ninth helped power the Red Sox to a 5-3 come-from-behind win over the Angels. 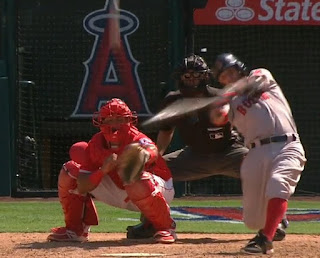 Down 3-0 going into the ninth, Jackie Bradley Jr. led off with a walk, followed by an Aaron Hill single. After strikeouts by Ryan Hanigan and Brock Holt, Mookie Betts singled to right, driving in JBJ. Pedroia (pictured) slammed his twelfth home run of the year to centerfield, and Xander Bogaerts followed with his fourteenth blast of the year.

Steven Wright started for the Red Sox, going five innings in the no-decision. He allowed all three Angels runs on ten hits and two walks while striking out five.

Clay Buchholz was the winner in relief tossing three scoreless innings. Brad Ziegler earned his second save for Boston.

Manager John Farrell was ejected in the 5th inning for arguing balls and strikes.