Recap - Upton, Verlander Too Much For Red Sox 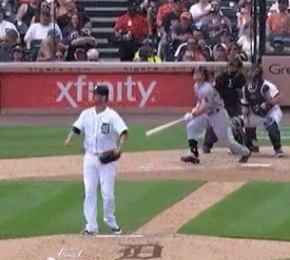 Justin Upton slammed a pair of three-run homers and Justin Verlander limited the Red Sox to just one run on three hits and a walk over six innings as the Tigers beat Boston 10-5 at Comerican Park on Sunday afternoon.

Henry Owens started and took the loss for the Red Sox. He was charged with eight Detroit runs on six hits and five walks over five. Both Upton home runs were off of him.

Sandy Leon and Andrew Benintendi each had two hits for Boston. Benintendi (pictured) hit his first career home run in the seventh with a man on.