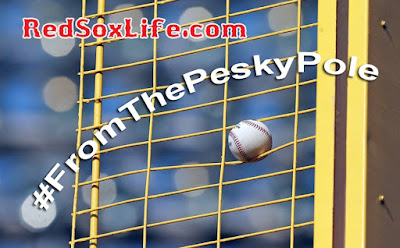 For my first edition of #FromThePeskyPole tweets, I got most questions regarding the pitching staff. This was not surprising considering at the time these tweets were received the pitching staff was struggling mightily. Lets get right into it.

I received a question regarding Drew Pomeranz.

I was sent a question on facebook asking “When Is Pomeranz going to start pitching to his hype?”
Well, keep in mind that this is unchartered territory for Drew and the Red Sox. Not only were the Red Sox duped into believing they had received a healthy pitcher, which was proven not to be true, from the investigation into AJ Preller and the Padres. Drew has never even gotten close to pitching this many innings. In all honestly, I have been happy with what Drew has brought to the table. He has had two bad outings, but the rest of his outings for this team have been competitive and he has gone at least 6 innings, which will help keep the bullpen well rested for this stretch run.
I don’t think is reasonable to place a Hype tag on Drew Pomeranz, the Padres were smart and sold while the Iron was hot. He did pitch in one of the biggest ball parks in baseball, which does help keep the runs down. The Red Sox did not expect Pomeranz to come right in and take over the ace role from David Price. He is pitching how they had hoped. A back end of the rotation guy who has a potential to mow through lineups when his curveball is working. That is exactly what has happened. In his defense with his high 3 ERA since joining Boston, the Red Sox offense has oft times taken the night off when he is on the hill.

I was tweeted the next two questions.

The first one is in regards to the Red Sox Playoff Rotation. The question read “Who do you think the Red Sox will use as their playoff rotation”
Nothing has been mentioned about this yet, as I am sure the focus is on winning the east and actually getting to the playoffs. If the Red Sox are able to win the east the Rotation should be at least based on Performance: Rick Porcello, David Price, Clay Buchholz, and Drew Pomeranz. The last two spots experience won out for me.
You all may notice the glaring omission of Eduardo Rodriguez. This was by design. Eduardo has been so hot and cold this year that even the Red Sox don’t know which pitcher is going to show up on the mound. The one who was one out away from a no hitter in Oakland, the dominant one who, before he got hurt, was on his way to a potential No Hitter against Baltimore. They may also get the pitcher who pitched on Thursday night, the one who struggles to find the strike zone or the one who forgets that he has another pitch besides his fastball. Eduardo has been much better the second half of the season, but in a playoff series he seems far more suited out of the bullpen to me.

The Red Sox may also opt to go with a three-man rotation of Porcello, Price and Buchholz with Pomeranz also out of the pen. Drew was a pretty darn good reliever for the A’s for a bit, before being placed full time in the rotation. He also has a nasty curve ball which is a really dominant pitch to lefties. Should be interesting to see what route the Red Sox take.

The last question has to do with will Yoan Moncada make the playoff roster.
As you all know you get an expanded roster for the Playoffs. Yes, Yoan Moncada is available for the playoffs, but at this point I see no justification for him being on the roster. The Playoff Roster needs to be players who will be able to contribute something that the Red Sox lack in their starting nine. That is why I would pick Marco Hernandez over Moncada at this point.

I know Marco Hernandez doesn’t have many more at bats, but in the At Bats that he does have he has shown that he can hit a little and still have enough pitch recognition to draw a walk or lay a bunt down when needed. He also has the speed enough to steal a bag if the Sox need it. Even though I am sure the Sox would prefer Brock Holt in that situation. Moncada is going to be just fine, he is going through the adjustment period that all young players go through. I would just temper your expectations. Look at what it had to take for JBJ and Bogey to be the quality of players they are now. It is going to be a lot of fun for a lot of summers watching this young team take the league by storm.

Thanks for your questions, and if you have some burning questions you would like answered please stay tuned for our next installment of #FromThePeskyPole