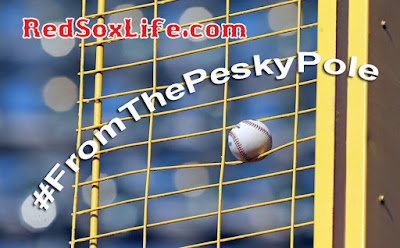 For the second installment of #FromThePeskyPole, I received a lot of questions regarding the playoffs and the roster that I think John Farrell will choose, but I also received a few other interesting ones, as well. So, let’s get right into those.

The second longest homerun is credited to Manny Ramirez. The troubling thing is that no one really knows for sure how far it went. It was listed at an official distance of 500 feet, and was said to have landed on the freeway beyond the Green Monster. However, no one ever reported seeing the ball, and no one in the Monster could actually tell where it landed.

If you go up to the green monster, there is plaque commemorating the homerun that Manny hit. I will say that Bryce Harper may wish to challenge the second longest homerun. If we were going on the projected distance stat as they do today, I would challenge that Bryce Harper may have Manny and even Ted beat. He hit a homerun to the 420 triangle and off the giant glass sign. The ball was still rising as it hit the back wall. That was the longest home run I have ever seen hit there.

The next question was regarding if players get to keep the balls they used to throw a shutout, of if they make an amazing run saving play, or, in this case, the preservation of a shutout.
Last year, when Rich Hill started this magical run he has been on all year, he threw a shutout. Mookie made the final play of that game with a very Mookie-esqe play in right. Since it was the final out he ran the ball back into the dugout. So, was he able to keep it? It is my understanding that a pitcher or a player may keep any ball they want to, if it holds significant value to their career or if it was used to reach some historic milestone. For example: the ball used in a no-hitter, your first career hit, your 500th home run, etc.

Since this was just a regular game in a lost season last year for the Red Sox, I would guess, although I can’t say for sure, that Mookie and Rich did not keep the ball. I like to think that Mookie did not keep that ball because he knew that he would be able to keep some balls from the playoff victory and the World Series win. Let’s just say, this team will have ample opportunity this year to hold on to some game balls.

The final question is a question that really had me thinking for a while. What will the Red Sox do at 3B next year?

This is a really good question considering the Red Sox have many options to fill that role. Travis Shaw is the incumbent and, despite his struggles, has been really solid there. Brock Holt can play third base, and is an interesting option. Aaron Hill and Yoan Moncada can also play, as well as Pablo Sandoval. Let’s examine these a little further.

Depending on the route the Red Sox choose to take at DH next year, Travis Shaw will still be an everyday player. He will play third base if Hanley moves to DH next year, but this may not be the best option considering the defense Hanley has given them at first base this year. If the Red Sox choose to go a different way with the DH, then Shaw will have to earn his spot just like he did this year.

Brock Holt is interesting and I think he may get a long look at third base. He won’t play LF as much next year with Benintendi and Chris Young out there, and potentially Blake Swihart, so why not let him play every day? He has been a proven commodity with the bat and in the field when healthy and given a chance to play. I still personally think the Red Sox view him as a super utility player and that is the role he will continue to serve.

Moncada, as I dissected last week, needs more seasoning at the minor league level. He is just simply not ready to hit major league pitching yet. So one year in the minors playing only third base will really help him. Aaron Hill is also an intriguing option. He is a proven veteran with a swing catered to Fenway Park. Yes, I know he has not done much this year, but also keep in mind this was the first time in his career that he was told he would not play everyday. That is a hard transition for a player to make in the middle of the year. One of the hardest things to do in baseball is play sparingly or pinch-hit, as to be a good hitter, you need to see pitches.

Now, it’s time to discuss your favorite lovable Red Sox, The Panda, Pablo Sandoval. I know he was terrible last year and refused to lose weight this year, but he has always played heavy. Last I checked he was considered a really good player in San Francisco. No one really knows how much his shoulder was bothering him last year, and no one knows how much the pressure of his contract and the media in Boston played on him either. I’m not saying that he is going to be a great player again. I just want to give him a chance and see what he can do. He is, after all, still in Boston for many more years. His contract and the prospects required to get him, based on his past and what he can do, make him almost untradable.