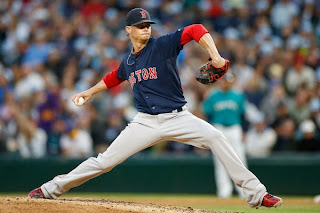 The Red Sox look to win the series against the O's tonight at Camden Yards and gain even more ground in the AL East. Clay Buchholz (7-10 5.20) will be on the mound as he continues to fight for a spot in the postseason rotation. He pitched well over the weekend against the Yankees going 6 innings and allowing just two runs on 7 hits, earning his 7th win of the year. With just 11 games remaining, the Sox have been on a hot streak that has dropped it's magic number towards clinching the AL East division down to 8 and a playoff spot is now just at 6. A victory tonight with David Price going tomorrow in the series finale will go along way towards ending the organizations brief hiatus from October baseball.

The Orioles will have Ubaldo Jimenez (7-11 5.94) to try and stop the Sox offense tonight. He's actually been one of Baltimore's best pitchers over the past month and has started to live up to his past resume since coming to Baltimore. Jimenez was put in the rotation when Chris Tillman went on the disabled list last month. Dustin Pedroia, who had last night off, is back in tonight's lineup and has hit Jimenez well. In 31 at-bats, Pedey is hitting .355 with 2 doubles and 4 RBIs.