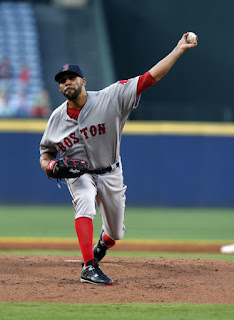 The Red Sox have won 7 in a row for the first time in over two years and will try to win their 2nd consecutive 4 game series. David Price (16-8 3.91) is on his own 7 game winning streak and will try to bounce back from his up and down performance against the Yankees over the weekend. In 4 starts against the O's this season, Price is 2-1 and in 27 innings he has 32 strikeouts. Hanley Ramirez is back in the lineup tonight and it appears John Farrell has already tried working in a rest day for some of his regulars; Dustin Pedroia sat out Tuesday night and tonight, Xander Bogaerts will start the game on the bench.

The Orioles have ace Chris Tillman (16-6 3.72) on the mound. Tillmans job tonight is to not only get his team a win to keep them in position to be one of the two wild card teams, but to slow down a Sox offense that has been on a tear this month. This is the 2nd time he's won 16 games in a season, the first being three years ago. David Ortiz hasn't had much success against the right hander, hitting just .194 in 36 at-bats. Bogaerts, who is sitting out tonight is worse, with just 2 hits in 20 at-bats.

- Manny Machado has three homers against Price, which leads the team
- The Red Sox magic number to clinch the division is now 6
- Dustin Pedroia is hitting .295 with 3 doubles and 5 RBIs against Tillman in 44 ABs