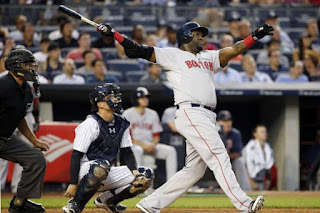 A win tonight for the Red Sox will clinch the Division and extend their season high winning streak to 12 games. The streak started against this same Yankees team back on September 15th, when Hanley Ramirez hit a 3 run walk off homer in the bottom of the 9th. The Sox first baseman is hitting .390 with 5 homers and 13 RBIs during the winning streak and as a team, they're hitting .271. This series will also be the last for David Ortiz against the Yankees, a team he's tortured over the past dozen plus years. He has 53 career home runs against the Yankees, to go along with 171 RBIs in 240 regular season games. David Price (17-8 3.91) looks to continue his impressive run as well, going 6-0 in his last 7 starts.

The Yankees haven't been eliminated from the Wild Card just yet, but their hopes are quite dim. They'll be sending Luis Cessa (4-3 4.30) to the hill tonight; Cessa last pitched against the Sox and took the loss in what is now the second win of Boston's current winning streak. Yankees Outfielder Jacoby Ellsbury has hit David Price pretty well in his career, going 28/78 with a homer, 7 doubles, 2 triples and 7 RBIs.

- The Red Sox magic number to clinch the division is now 1!
- Brian McCann is another Yankees hitter who has had success against Price, hitting .345 in 29 at-bats with 3 homers and 7 RBIs
- Hanley went 2/2 against Cessa on 9/16 with a solo homer