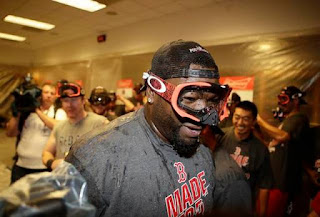 Well it didn't go exactly how they wanted it, but the Red Sox clinched their 8th AL East Division title last night. After scoring 3 runs in the 8th, the Sox bullpen fell apart in the 9th which ruined their chances of celebrating on the field in front of Yankee fans. Now all the team has left is 4 games which will help determine the seeding of the playoffs, could be as high as 1 with home field throughout the playoffs, could be 2 with a combination of 3 wins or 3 Indians losses, or land in the 3 seed if they completely fall off the rails to end the season.

Henry Owens (0-1 7.79) gets his fifth start of the year for the Red Sox, and just his first start in the past month plus. He replaces the injured Drew Pomeranz who currently has a sore forearm and has been informed that he will not make another start this season or postseason.

The Yankees with their win last night still have the smallest chance of making the playoffs, but will have to win out while others in front have to lose out. CC Sabathia (8-12 4.02) gets the ball for the final time this year and he will be facing David Ortiz for the final time as well. Ortiz will be honored before the game, with the tribute beginning around 6:50pm. Ortiz has struggled in his last road series and has a .237 career average against Sabathia to go along with 18 strikeouts.

- Henry Owens made his major league debut at Yankee Stadium last August
- Last nights walk off homer by Mark Texieria was the first of his career
- The Red Sox have set up their rotation for their final series of the season: Porcello, Rodriguez, Price