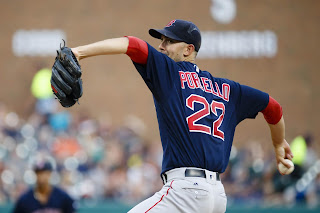 There are plenty of connections between both the Red Sox and Indians organizations, from John Farrell and Terry Francona and Brad Mills on the coaching staffs, as well as Mike Napoli and Andrew Miller being on the last Sox World Series team. You're going to hear about them all throughout the first round. And while those connections are a some-what interesting story line, the first two games of this series will be centered around just how well the Red Sox will perform on the road.

They finished their season 5-5, dropping five of their last six, including 3 against the Yankees on the road. However, they have the best record of any team in the AL on the road (46-35). By dropping five of their last six, they lost home field advantage not only throughout the playoffs but even in this opening round, and now have to face a team who's tied for the best record at home in the AL (53-28).

The first test will be for Rick Porcello, who has just two starts in the postseason and 8 appearances overall. He's pitched in 16 1/3 postseason innings, striking out 13 and walking just two which goes along with a 4.41 ERA. He hasn't started a playoff game since 2011 with the Tigers, but there was no doubt that the Cy Young candidate would be getting the ball in Game One.

Carlos Santana and Jason Kipnis will be the first two hitters against Porcello tonight. They've faced Porcello the most out of the Indians lineup, Santana is hitting .263 in 38 at-bats while Kipnis is hitting .323 in 31 at-bats. The two combined for three homers and 11 RBIs. Porcello was 22-4 with a 3.15 ERA this season, faced the Tribe once in 2016 and got the win. Obviously because he pitched for the Tigers for a number of years, he has plenty of experience against them, but we all know the postseason can be a completely different atmosphere.

The Indians will start Trevor Bauer, who's never pitched in the postseason before, went 12-8 this year with a 4.26 ERA. The Red Sox lineup doesn't have a ton of experience against against Bauer, who's pitched in three career games against the Sox, with two starts and has a record of 0-2 with a 12.91 ERA. Both David Ortiz and Mookie Betts have homers off of Bauer. While we all know the reputation that Ortiz has once October comes around, but this will be Betts' first postseason game tonight, along with fellow outfielders Jackie Bradley Jr and Andrew Benintendi.