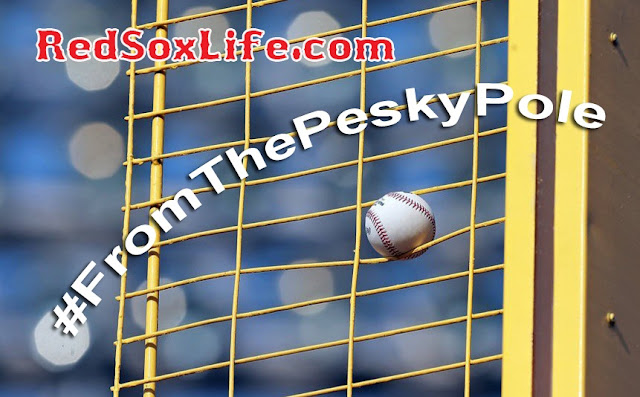 This week, I received a lot of similar questions from previous weeks, so for this edition of #FromThePeskyPole, I will answer a few of the burning Red Sox questions I have seen in other forums and in other sources of social media. Let’s get right in to it.

I did receive one question regarding the trade of Drew Pomeranz.

As many of you know, the Padres organization was fined, and some of their front office suspended, for their lack of sending appropriate medical records on their players. Drew Pomeranz was listed as one of the players deemed to have medical information hidden. At first, it didn’t really bother me, as he was pitching as I had expected, and it was said that the only information that was hidden was the fact that he was taking Advil after each start for general soreness. Not a super big deal.

Now, as we enter the playoffs and the crucial stretch run, we are led to believe that it may be much more than that. Drew has been shut-down with arm soreness. It seems to be severe enough that his roster spot for the ALDS may be in question. It has also been said by the Red Sox organization that if he does pitch again this year, it may be out of the bullpen. This may not be a bad thing, as Drew has been really effective out of the bullpen in his career prior to starting. Is the arm soreness a result of the Padres hiding medical information or is it just the result of a career high in innings pitched? No one knows for sure, but I think it is worth monitoring in the future.

A question that will be asked many times over the next week is, how long of a leash with John Farrell have with Craig Kimbrel?

In my opinion, the answer is a complicated one. Sans the last three outings, he has been nothing short of dominant. I would say he has been one of the best closers in baseball since his time in the Major Leagues. He also has a 3.40 ERA with 31 saves, which is nothing to shake a stick at. Overall, he has been solid for most of the year. However, I will say that with Koji back in the fold, and Brad Ziegler out there, it is a luxury to have three closers.

I think that Kimbrel may get one outing in the ALDS to prove he can throw strikes and return to the normal dominant closer he has been for much of the year. If he struggles in that outing, I can see John Farrell going to Koji. It’s the playoffs, and every single game matters. Ultimately, I think Craig Kimbrel will be alright. He has the ability to lead us to the World Series and could be mentioned in the likes of Foulke, Papelbon and Koji, all closers that have finished out a World Series clinching victory.

Another item to be discussed is the non-home field in the ALDS.

Keep in mind Cleveland still has one more game to play as of Monday against the Tigers. The MLB kept that game as an “if necessary” game, meaning that it would be played if it mattered for playoff seeding or wild card possibilities. With the way the games have gone this weekend, that game looks every bit to be a possibility.
Even if Boston does have to start the series off in Cleveland, the extra game will actually help Boston because Cleveland will have to use more pitching. Also, their players will not get the three days rest like Boston will. All of these factors are important. The games before the playoffs are the most mentally draining games of the season, and any time you can get a little built in All-Star break, it is to your benefit.

I love this time of year. Who else is ready?