Recap - Anyone Else Had Enough of Pomeranz?

It would certainly appear the manager has.

Drew Pomeranz couldn't get past the fourth inning and the Red Sox bullpen allowed four home runs in three-plus innings as the Athletics pounded Boston 8-3 at the Coliseum on Saturday. 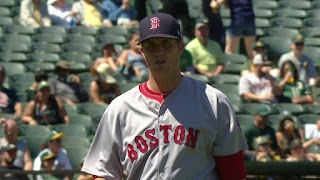 Pomeranz (pictured) was lifted prior to the bottom of the fifth inning after throwing 97 pitches, leading to a heated exchange with manager John Farrell that was captured by the NESN telecast. Ben Taylor faced the next four batters, allowing four runs on three hits (including two home runs) and a walk.

In eights starts so far this season, Pomeranz has failed to record so much as a single out in the seventh inning of any game.

Dustin Pedroia, Hanley Ramirez and Chris Young each had two hits in the loss.