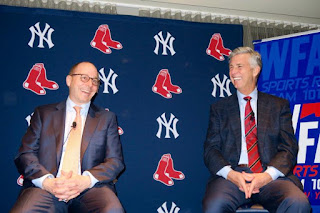 Well we switched some things up for our fourth RSL Podcast and had all three previous guests call in to discuss a few of the recent story-lines for the Sox.

We started with Jim Monaghan, as he is in the heart of Yankee Country, what his thoughts were from this past series between the two rivals. Also, we agreed that the Frazier/Robertson/Kahnle trade reminded us of an old-school Yankee move and now forces Dave Dombrowski to counter with something before the 7/31 trade deadline.

That's where Evan Marinofsky jumped in. We debated on what possible moves Dombrowski can make that even makes that much of an impact for the impending stretch run. We laughed at the Miguel Cabrera/Manny Machado rumors and still have our sights on the Royals over the next week or so to find out if the Moose might be set loose.

Finally, Ben Whitehead gave us his outlook for the remainder of the season. While we both like this team a lot, he still has his doubts until the talent on the roster starts to play more consistently. He also expressed that without having a Gomes or a Millar in the clubhouse, doesn't mean this team isn't a likable bunch and can still find success once the calendar turns to October.