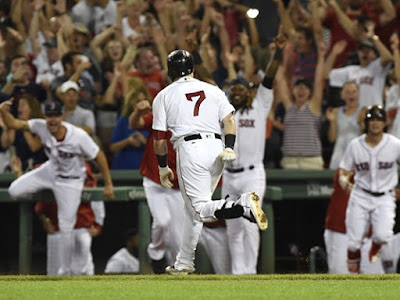 Following up the game of the year, we recorded another podcast to discuss whether or not this team finally turns the corner. Ben Whitehead and I start off discussing the importance a win like Tuesday night can mean for the mentality of the roster, especially coming from one of the least likely heroes, Christian Vazquez. We stressed the importance of the next series against the White Sox and Ben gave me his demands for what this team needs to do. Of course, we had to talk about the impact the two new bats (Devers and Nunez) have had already and believe that when this team gets healthy over the next week or so, they should be ready to put it all together.

The newcomer to the podcast is Bryan Mauro, a RSL contributor from Lincoln, Nebraska. He pointed out that last season, in similar fashion, that the Hanley Ramirez walk-off against the Yankees drove this team in the final weeks of the season and believes that this win will have the same result. We discussed his ideal lineup and he gave a lot of love for Deven Marrero while also pointing out that he should have a spot on this current roster.

The stretch run is getting closer by the game. Lots of scoreboard watching will be happening over the next couple of weeks and we will have plenty more podcasts coming your way, hope you enjoy!