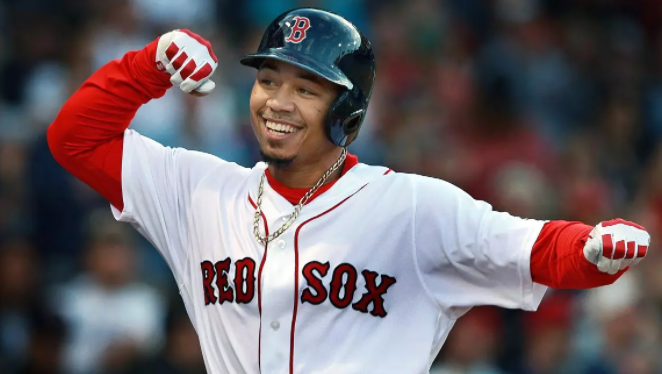 Mookie Betts is a player that was widely expected to have a strong season. This sentiment was shared by his team the Boston Red Sox, by the public and by general Red Sox betting odds. Now, in spite of his down year, the young slugger is making history. The downside of this fact is that unfortunately for his team, this prized outfielder is not eligible to run for the American League MVP once again this season.

However, because of a string of recent changes in his general stance and his offensive surge, it is clear that Betts is presenting his impeccable hitting ability. Thanks to this, he is joining a very impressive and elite club of sluggers in a clear historical fashion. Betts, who is in his down year, has managed to get in this season 20 stolen bases and 20 home runs. What is even more impressive is the fact that he did all of that in the previous year as well. This allowed him to become the first Red Sox player that was able to steal 20 bags and hit 20 home runs in two seasons in a row (back-to-back).

By all accounts, this is an exceptional feet for the young player but also for his entire Boston team. But, on September 12th, Betts managed to make history once again with his skills and abilities against the Oakland Athletics. In that game, he was able to hit two home runs and an also hit a triple on that Thursday night. This made him a part of an exceptional group of young hitters in the history of US baseball. On the same night, he recorded the 10th game in a row where he managed to achieve three extra-base hits, all while being under 25 years of age. That 10th game succeeded in putting him in the company of true baseball legends.

Red Sox Media Relations division made this official when they produced a series of fact about this event. According to their statement, the leaderboard that covers the biggest number of three extra-base hit baseball games under the age of 25 has now been changed. As of now, Betts is tied with the legendary Lou Gehrig. He is also just one game behind Rodriguez and DiMaggio. Unfortunately, Betts will become 25-year-old on this October 7th which is very close.

Chances are that in this short period he will not be able to have another three extra-hit base games. But, the statement said, as most baseball fans know, everything is possible in this game. During the same period and sometime after it, the Red Sox will face off against Cincinnati, Baltimore, Houston, and Toronto. Now, there is no doubt that the team from Boston is proud of their player making history in their own franchise and its impressiveness is clear for all to see. Betts had a turbulent season, but moments like these will last forever. Now, the team gets back to their efforts to secure the title for the American League East division. In this mission, it is certain, just as the Red Sox betting odds show, that Betts and his scorching bat will be leading the team’s offensive charge.