As we complete the first month of the season, the Boston Red Sox stand strong with a 20-7 record. They will finish the first month of the season with the best record in baseball. The Red Sox have had both an eight game win streak and a nine game win streak so far in this young campaign. The lone loss was the middle game versus the Yankees. Despite the Red Sox only winning 3 of their last 8 games, top sports sites still have the Red Sox as one of the favorites to win it all come October. 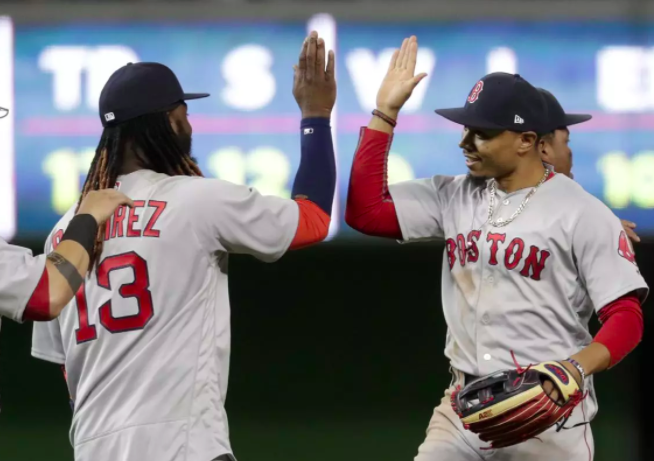 The Red Sox had success versus the Florida teams to begin the season, as they went 6-1 against the Tampa Bay Rays and 2-0 against the Miami Marlins. The Rays paid Boston back by winning two of three this past weekend at Fenway Park. Rick Porcello and Eduardo Rodriguez are both undefeated so far with records of 4-0 and 3-0 respectively. Red Sox catcher Sandy Leon had the following to say about Porcello's strong start, coming off a down year:


Rodriguez heads to the mound tonight versus the Kansas City Royals hoping to match Porcello's 4-0 April. Sox ace Chris Sale and Drew Pomeranz will pitch the following two games. Craig Kimbrel has led the Red Sox out of the bullpen with an 0.77 ERA and 7 saves. Kimbrel is in his third season with the Red Sox.

Hitting wise, Mookie Betts leads the Sox with a very impressive OPS of 1.173 (to go along with 8 home runs). The twenty-five year old Xander Bogaerts is second at 1.104 in his injury shortened season. The Red Sox big free agent signing, J.D. Martinez, has had a solid April leading Boston with 22 RBI's.

This of course is manager Alex Cora's debut season in Boston and he has to be very pleased. He's also resting players this season, sop the Red Sox can have strength come the Fall.