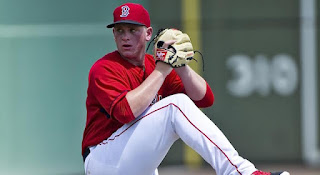 Earlier today it was reported that Jason Groome, the top pitching prospect in the Red Sox's farm system, will undergo Tommy John surgery within the next few weeks.

Groome is ranked as the No. 85 prospect in the minors by MLB.com's "Prospect Watch".

Last season, the 19-year-old made 14 starts between Single-A Greenville and short-season Lowell. He went 3-9 with a 5.69 ERA and 72 strikeouts in 55.1 innings. He was found to be injury prone last season with a flexor strain in his elbow that ended his 2017 campaign and resulted in him starting this season on the disabled list as well.

Even though his statistics weren't ideal, the potential is there and has the Red Sox excited. But, these injuries do not have the Sox as ecstatic.

Recently, the baseball world has seen how badly Tommy John surgery can effect a player with Matt Harvey. Harvey was a Cy Young candidate in 2013 until he went down with a tear in his elbow. Two Tommy John surgeries-later and he's never been the same.

After beginning the season 0-2 with a 7.00 ERA, Harvey was designated for assignment and then traded to the Cincinnati Reds yesterday.

That isn't the automatic outcome of Groome's career. But as of late, the taste in everyone's mouth surrounding Tommy John surgery has been exceptionally bad.

On another note, Dave Dombrowski has been criticized for trading away a lot of the Red Sox's farm system. To see one of their remaining top prospects be so injury prone so early-on in his pro career is definitely not a good sign.