The game was over...or so everyone thought.

For all the difficulty he has hitting a baseball, Jackie Bradley Jr. doesn't seem to have a problem catching one. 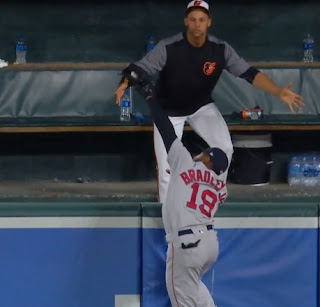 His leaping catch over the wall in center field in the bottom of the 11th inning robbed what would have been a walk-off home run by Trey Mancini.

It was another in a long line of Gold Glove-caliber catches that JBJ seems to make every single night in center.

Andrew Benintendi's solo home run in the top of the 12th proved to the be the winning blow as the Red Sox beat the Orioles 2-1 Wednesday night.

Chris Sale started for Boston and had turned in an epic performance - eight innings of one-run ball - scattering three hits and striking out 14 without issuing a single walk.

Meanwhile Baltimore's Andrew Cashner limited the Red Sox offense to one run, a Mookie Betts home run in the third.

JBJ's spectacular catch and the Benny Blast brought reliever Ryan Brasier from an expected loss when he served up the 0-2 pitch to Mancini to a win with Heath Hembree striking out the side in the 12th for the save.

With the win, the Red Sox are now at the .500 mark for the first time since March 29 when they were 1-1. They've won eight of their last ten and return home for an eight-game home stand beginning with the Mariners on Friday night.