A pair of three-run innings and a good performance from Eduardo Rodriguez helped the Red Sox to an 8-3 win over the Royals at Kauffman Stadium Tuesday night. 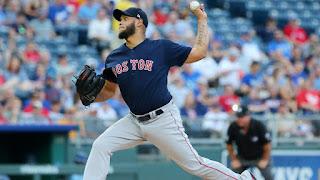 Kansas City took a 2-0 lead in the second inning on a Cheslor Cuthbert home run, the only runs Rodriguez (pictured) would allow. He went 5.2 innings in earning his sixth win of the year allowing just six hits and not walking a batter while striking out seven.

The Red Sox took the lead with three runs in the top of the sixth on an RBI triple by J.D. Martinez, a sacrifice fly by Xander Bogaerts, and a run-scoring double by Brock Holt.

Boston added three more in the eighth on a pinch-hit home run by Eduardo Nunez (hitting for Holt) and two more in the ninth on a Rafael Devers two-bagger.

Martinez led the Sox with three hits, pushing his average to .301.

The Yankees and Rays both lost, allowing Boston to pick up a game in the standings on both teams they are currently trailing in the AL East.