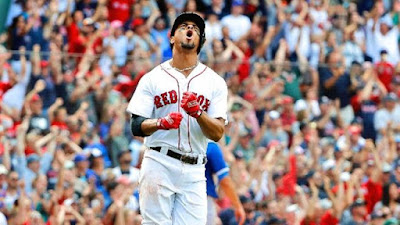 Xander Bogaerts on inaugural all-MLB first team, Mookie gets a mention on the all-MLB second team.

After fan voting and an expert panel collaborated to name the first ever all-MLB teams, Xander Bogaerts was finally not completely robbed of an award. Rightfully, Bogaerts beat out MVP finalist Marcus Semien for a spot on the first ever all-MLB first team. He was the only member of the Sox amongst seven nominees to be represented on the all-MLB first team. In 2019, X gave it to 'em with a .309/.384/.555 slash line and finished in the top 5 in MVP voting. He had the clear best offensive 2019 season of any shortstop in baseball and was clearly the only deserving member of the Sox to make it. He did it.


Wouldn’t be an All-MLB Team without these guys! ✨

Congratulations to Mookie and Xander! pic.twitter.com/N3oPOKluxJ


The Red Sox shortstop sensation has fully made the transition into superstar status and is the unofficial team captain. The cherry on top is he will be in Boston for the foreseeable future.

MLB, clearly trying to give out more awards in attempts to emulate the NBA, also honored all all-MLB second team for close calls and Mookie Betts, despite the down year, was good enough for a spot on the all-MLB second team, joining sophomore studs Ronald Acuña Jr. and Juan Soto. He lost to the obvious trio of MVP finalists Cody Bellinger, Christian Yelich, and Mike Trout.