Major League Baseball has been hit with scandals before, but the accusations of sign stealing via the use of electronic means by the Houston Astros (and possibly the Boston Red Sox) in recent years has really placed a huge spotlight on the integrity of the game. 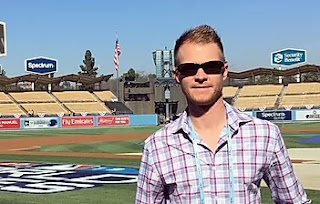 The Red Sox connection to this is currently still under investigation and the lack of a resolution held up the public announcement that Ron Roenicke has been hired to be the team's new interim manager following the departure of Alex Cora.

Danny Picard has been part of the sports media landscape in Boston for well over a decade. The host of The Danny Picard Show podcast, Danny recently published a story on his website called “Living On the Edge – Baseball’s Love/Hate Relationship With Technology and How A Chosen Few Are Paying the Ultimate Price For Using It.”

A few days prior to the most recent article by Ken Rosenthal and Evan Drellich in The Athletic (subscription required) that offered more details into the role Carlos Beltran played in setting up the Astros' electronic sign stealing, I spoke with Danny about what he found in researching his story.

If (Rob Manfred) really wanted to keep digging, he could ruin his league. He could have teams firing their managers left and right.


RSL - To date, Carlos Beltran and Alex Cora are the lone examples Major League Baseball has pointed to in the investigation of stealing signs by electronic means. Why is that?
DP - I think (MLB Commissioner) Rob Manfred wanted to use them as an example, because deep down inside he knows (sign stealing) is prevalent. This isn't just the Astros. This isn't even just the Red Sox or the Yankees or the Dodgers. There are other teams involved and I think he knows that. He wanted to use this in order to set an example, but the problem with that is if he really wanted to keep digging, he could ruin his league. He could have teams firing their managers left and right. It was a risk that (Manfred) took to use just a couple guys to set an example, but I don't think he's going to keep digging. I think they will try to ignore or bury anything else the best they can and hope that other organizations can see the severe punishments and see what other organizations were forced to do by getting rid of Cora and Beltran, and hope that the organizations are going to crack down on this. Players I've talked to believer that they're always going to find a way.

RSL - The Yankees and Red Sox were already fined undisclosed amounts of money in the Apple Watch incident, amounting to just a slap on the wrist. So that clearly didn't deter anyone.
DP - In Manfred's nine-page report (on the Astros' sign stealing), he mentioned the Red Sox and Yankees so he's kind of contradicting himself in his own report. Players believe these punishments are going to force players to find another way; that's why the technology aspect of it is so interesting. We put so much emphasis on the video replay room. They have the live feed of the game in the club house so unless they're going to ban players from going into the club house during games, technology is always going to be there for them to use. And there are teams that have scouts designated to steal signs from other teams. So when they're facing a pitcher a certain night they know that guy and his preference of sign sequences in certain situations. I don't know how you can prevent that. The hitters say that the pitchers should change their signs and one thing I've learned from talking with all these pitchers is that the reason pitchers don't change signs is that a lot of times their catchers aren't smart enough to understand and remember all the sign sequences.

People are being naive if they think that Alex Cora created this system.


RSL - Based upon the number of players you spoke with in writing "Living On the Edge," how many teams would you say are involved in doing something along the lines of what the Astros were accused of?
DP - I'd say more than half of the league, that I actually know of. I have to take that and look at it and ask, "What's preventing the other half from doing it? Is it just because I didn't talk to them? Is that the only reason I'd say they didn't do it?" Again, you have live feeds of the games in the club house. You have scouts who are doing this stuff. And you have players who bounce around from organization to organization. People are being naive if they think that Alex Cora created this system. He didn't. It's prevalent in the game. I also thought it was important to point out in my story what pitchers are doing too, how they're using substances (for tackiness on the baseball) so they're not sailing one up-and-in at a batter's head.

People tell me the Dodgers are just as guilty as anyone else if not more guilty.


RSL - Dodgers fans are particularly irate, going so far as to start a petition to have the 2019 World Series title awarded to them as a result of the sign stealing. If you follow Carlos Beltran's timeline, and you add in Alex Cora's remarks about him and "devices" from one of his London press conferences, it isn't that far of a stretch to think that the Yankees were doing something similar to what the Astros were doing when Beltran played there.
DP - People tell me the Dodgers are just as guilty as anyone else if not more guilty. They had a lot of young kids come up and mash right away, and people are skeptical of that. When players believe that things are going on in certain buildings, Dodger Stadium is one of the places they believe it's going on in. There was a Dodgers press conference the other days where the players were crying about it which is kind of a joke because they know exactly what they're doing...especially in their own building. They're trying to play that card right now because they don't think anyone is ever going to catch them. In a way, I caught them.