Major League Baseball's 2020 schedule has been released with the Red Sox opening at home against the Baltimore Orioles on July 24th. 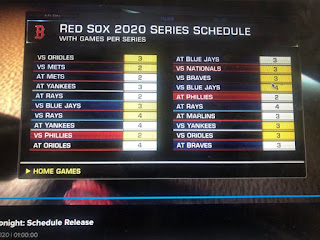 The bad news is that 13 of Boston's first 23 games are against the New York Yankees and Tampa Bay Rays, arguably the two strongest teams in the American League. Given that the regular season will be just 60 games long, that doesn't bode well for Boston's chances at making the postseason unless the team gets off to a good start.

Overall, the Red Sox will play the Orioles, Yankees, Blue Jays, and Rays 10 times each. The remaining 20 games will be played against the Braves, Marlins, Mets, Nationals, and Phillies.