OTD in 2002, Ted Williams passed away 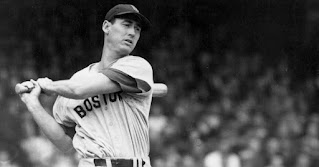 Ben Fadden
Staff Writer
On this day in 2002, the best player to ever put on a Boston Red Sox uniform passed away due to cardiac arrest.
Williams is known to many as the best hitter in baseball history and some of his statistics are still mind-blowing to this day.
In 1941, he hit .406 (that's not a typo) and no player has ever been able to do that since. Tony Gwynn was the closest when he hit .394 before the strike.
His career batting average was .344 and he finished with over 520 home runs and 1,800 runs batted in.
At Fenway Park, he even has a red seat dedicated to his 502 foot home run that he hit in 1946, which still stands as the longest home run ever hit at Fenway.
He will be forever remembered in Major League Baseball as being one of the greatest hitters ever and today we celebrate the man that was a 19-time All-Star.
For more Red Sox news and analysis, follow Ben Fadden on Twitter @benfaddenmlb

Ben Fadden
Passionate Red Sox fan looking to share his opinion with all of the readers. You can let him know what you think @benfaddenmlb on Twitter.
Newer
Older