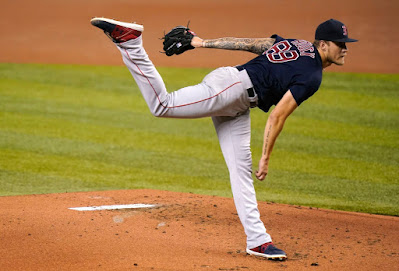 (Photo: Lynne Sladky/Associated Press)
On a night that featured Boston and Miami kicking off a playoff series in a bubble, it was baseball that provided a Boston win on Tuesday night as the Red Sox completed a shutout win against the Marlins. It was the second Red Sox shutout win of the season, ironic from a pitching staff that possesses the worst ERA of any team in baseball. More importantly, however, it was on the back of 24-year-old Tanner Houck, who made his much anticipated major league debut. Houck showed up big-time and in a game that didn’t mean much otherwise, Sox fans got to witness some flashes of brilliance from a possible cornerstone to the future Boston starting rotation.


Tanner Houck's sliders last night. The Marlins went 0-5 with 4 strikeouts against it. When they swung they whiffed 46% of the time. pic.twitter.com/mPqkjCtBxR


Houck, whose slider has drawn comparisons to that of future hall-of-famer Max Scherzer, was the 24th overall pick in the 2017 MLB draft out of Missouri, the alma mater of Scherzer. He mixes that slider with a lively fastball in the mid/upper-90s and, to paraphrase Eck, a sinker "just to stay in shape." And while he used to round out his repertoire with a changeup, he scrapped it this year at the alternate training site in favor of a splitter, which he thinks he can control better.

Houck's big night started by giving up a base hit to former all-star Corey Dickerson on a 95 mph fastball, but got his first out on that exact play when Yairo Muñoz, playing left field, threw out Dickerson trying to stretch his hit into a double. He then earned his first strikeout of his big-league career when he got former all-star Jesús Aguilar to swing air at a 96 mph paintjob on the outside corner, sparking a reaction of respect from their #3 hitter.


Houck’s most impressive moments of the game were in the second inning when he struck out Jazz Chisholm on a wipeout slider in the dirt to strand a pair and the fourth inning when he froze Miguel Rojas on a slider in the zone to again strand a pair. Vazquez displayed confidence in the righty’s stuff and the battery asserted their dominance on the Marlins offense when they needed it the most. Despite Houck’s one knock being his inconsistency in control (and granted, he only threw 57% strikes in his debut), he buckled down and attacked the hitters with runners in scoring position. What was even more commendable is he did all of this while the Red Sox were in a tie game of matching shutouts. Houck needed to be impeccable when he had runners on and he was.

When it was all said and done, Houck ended his night as the best Red Sox major league debut for a starter since Eduardo Rodriguez threw 7.2 innings in 2015 at Texas. Thanks to a Jackie Bradley Jr. RBI single in the 6th inning, Houck was also rewarded with a win for his 86-pitch performance with multiple high-stress situations. Ahead of the big night, he also pledged $100 per strikeout to Pitch For Adoption and finished the night notching 7 in the K column.

With several concerns surrounding the readiness of Houck and whether he can control his stuff on the big stage, his debut ended up being one of the few bright spots of an otherwise traumatic pitching staff for the 2020 Red Sox. In recent times, Boston has been notoriously lackluster at keeping and developing homegrown talent in the rotation. Could Houck break the trend?
The answer should become closer to evident as soon as next season, when the Red Sox could be looking to field a healthy, competitive pitching staff. While most of that is going to depend on whether Chris Sale returns as his dominant Cy Young finalist self, Houck, who is currently ranked the #10 prospect in the Red Sox organization, could look to become a cornerstone of the staff very soon and has the upside to be a #3 starter quickly.

If Houck ends up being a trustworthy member of the rotation, could the Red Sox be on track for one of the best starting rotations in the league in the near future? Given health, the sky is the limit for a healthy Chris Sale, Eduardo Rodriguez, Nathan Eovaldi, Martín Pérez (once the team option is picked up), and Tanner Houck — the kid is legit.