It's official - Cora is back!

What a difference ten months can make.

Back in the pre-pandemic days of January when MLB was still dealing with the backlash from the Houston Astros cheating scandal, Alex Cora walked into Sam Kennedy's office and said he felt he wouldn't be able to manage in 2020 and needed to go. 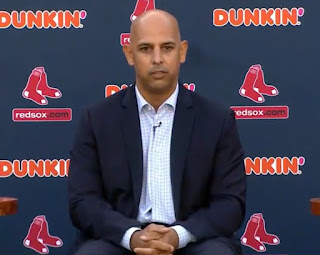 Now in mid-November, a contrite Cora was introduced by Kennedy, Chaim Bloom, and Brian O'Halloran as the manager of the Red Sox on a two-year deal that runs through 2022 with club options for 2023 and 2024.

There was no attempt to skirt the issues surrounding Cora's departure earlier this season. Speaking to reporters in a virtual press conference broadcast on the MLB Network, Cora said, “This situation is part of who I am for the rest of my career. As a man, I have to deal with it. I don’t want people to make it seem like it’s a great comeback story. I don’t want that. I’m going to use this bad experience to make people better, starting at home. The process started early in the year and we’re going to continue. I know there’s a lot of people that I disappointed and for that I’m sorry. And also telling those people that, hey, I’m still Alex. I made a mistake. I still love the game and I still love what I do, and I promise you that from now on I’m going to use this experience the right way. I’m not proud of it, I’m not happy about it, but we have to move on. I’m happy to be back home.”

Both Bloom and Cora acknowledged that they knew people wouldn't necessarily believe their statements today, but both were firm in their respective statements that the decision to bring Cora back was Bloom's, and Cora with respect to not bringing what he did with the Astros (in terms of stealing signs) with him to the Red Sox.