Flowers Need Time to Bloom; A quiet winter may have been a prelude to a fruitful summer


For many fans of Red Sox nation, this past offseason was not the one they were hoping for. It is a fan base that is used to headlining Free Agent names being added to the roster in past winters such as Manny Ramirez and Curt Schilling, or more recently David Price and JD Martinez. Somehow Garrett Richards and Hunter Renfroe don’t quite fit the bill or generate the same excitement. And although one could argue that Free Agency is a dangerous game of craps and for every Manny Ramirez there’s also a Carl Crawford, the point is that the Sox were one of the players at the table. Sox fans got pleasure out of knowing that if there was a notable FA hitting the market that offseason, then Boston always had a shot of signing him. But after recent years of questionable long term contractual investments, combined with giving away prospects and not obtaining them, the Red Sox find themselves in a position where adding those sexy names through Free Agency made absolutely no sense. The crop of names that were available this past winter were quite impressive (Bauer, Springer, LeMahieu, Realmuto, etc.), but these type of big splash moves are for teams who are 1 or 2 pieces away from contending for a World Series bid. And the most optimistic Red Sox fan would still tell you that this current roster is simply not there yet. Adding these type of heavy contracts to a roster that is not quite ready to win would be counterproductive and ironically slow down the process of being competitive any time soon. On the contrary, a team that is rebuilding but looking to expedite the process needs to be obtaining young/cheap controllable assets. This can be done in a multitude of ways, most notably through the draft and the trade market. It is no coincidence that the teams who were most aggressive this past winter were teams who spent years acquiring such a pipeline (Dodgers, Blue Jays, and Padres). These organizations spent years stockpiling young talent and once they established their core, they could be aggressive financially. And they could do all this without mortgaging their future, due to the pipeline and system that has been created. This type of well-oiled machine, however, is not built over night. And also produced some much needed quite winters for these ball clubs. Dodger’s President of Baseball Operations Andrew Friedman notoriously made no big FA signings and shed big name contracts for the first several years of the beginning of his tenure in LA. Blue Jays General Manager Ross Atkins has excelled in the draft and international signing market, 80% of their starting lineup coming from those two fields. And Padres GM AJ Preller has produced one of the best farm systems in recent memory, ranking in the top nine of best farm systems the past 5 years. These clubs spent winter after winter not spending, but stock piling. And when the time was right, they struck. And as a result are favorites to be playing well into October. It is clear that Chaim Bloom believes in this method and is in the beginning phases of implementing it here in Boston. In his brief 17 month reign as Chief Baseball Operator, Bloom has now added 16 prospects through trades and the Rule 5 Draft and of those identified already, nine are among the Top 30 prospects in the Red Sox system. Bloom has also been adamant in stating his goals for this roster construct, which is “sustainable success”. He’s been quoted as saying such numerous times since he’s arrived, and looking at the moves he’s made thus far, he seems to be serious. 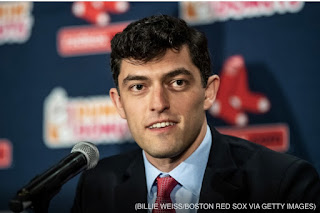 Every acquisition Bloom has made in his short tenure has been for controllable assets. Even the veterans he has signed all have language in their contracts that give the team control after just one year. Under this kind of structure, the team has the ability to keep the player on a friendly deal if they perform, or cut ties immediately if they don’t. These contracts are also very trade friendly, another powerful tool and option to acquire impactful talent that will speed up the process of competing for titles again. The roster is loaded with high upside/ low risk types that could garner huge returns come July. Think of the 2016 Yankees. They were in a position where they were not ready to win a title and their roster needed turnover. But they had enough talent to still be relevant and compete for a playoff berth. So at that year’s trade deadline, they flipped 3 veteran pieces for a number of prospects. Prospects who included Gleybor Torres, Clint Frazier, and Justus Sheffield. Two who are still contributing to a World Series favorite today, and the other being the main chip in acquiring a top 10 AL pitcher at the time. All while still competing for a playoff spot that year. In my opinion, this is the model for the 2021 Red Sox. What is being lost in the horrid 24-36 finish last year, is that they were a top 5 offense in the midst of this and the amount of talent that is still on this roster. A Lineup beginning with Verdugo, Devers, Boegarts, and a typical Martinez is enough to strike fear into any opposing pitcher and have proved that this spring by being no worse than 3RD place in OPS, AVG, HR and Runs in this year’s Grape Fruit League. And the “boring” signings so many of Sox nation complained about this past winter have looked very promising this spring. OF/INF Kike Hernandez has been scolding the ball all March producing a slash line of .340/.466/.617 and UTL Marwin Gonzalez looks like he is primed for a bounce back season under his old Manager with an impressive .300/.364/.520 line and manning multiple infield and outfield positions all spring. Pitcher Garrett Whitlock has been the talk of camp all March and has been arguably the most impressive Red Sox pitcher to take the mound this month. All 3 players have really stood out this spring, and all 3 were acquisitions made by Mr. Bloom. On the contrary, the players Bloom has sent packing in his short reign are not finding so much luck, at least thus far, in their new homes. Andrew Benintendi continues to look like his best days are behind him, as he has struck out in 30% of his AB this March while hitting a pedestrian .225 BA. Jackie Bradley Jr. is already battling injury and in the games he has played in he’s struggled, and Heath Hembree is now without a job. Now although these results must be taken with a grain of salt as we cannot put too much emphasis on Grape Fruit stats and it is still early in terms of time frame of some these roster transactions, they are what the scoreboard reads so far and it is hard not to think that Bloom is hitting at a pretty high clip with a lot of the roster decisions he’s made so far. Spring training has encouraged the thought that this team has more than enough talent to compete for a playoff spot, but still invest in their future come July’s trade deadline. And because of the type of contracts and players Bloom acquired and didn’t acquire this winter, they are in prime position to accomplish both. So while fans were crying and complaining all winter about the lack of splashes, if one takes in consideration of what Bloom is building, this was a very productive offseason. Boring? Perhaps. But if you want to emulate the Dodgers/Padres/Jays today, you also have to emulate their ‘yesterday’ as well. And Chaim Bloom is doing exactly that. Spring time is here and summer is around the corner. Which for us seam heads, means baseball time. But for most it means flower season. And while we reap the beauty and ambience of flowers in the spring, they truly were created by the watering and harvesting in the long and dark winter. And although the harvest process is not exciting and takes much time, it is vital in producing the finished product. I think in time we will see, so too are these Chaim Bloom-led Red Sox.