Kyle Schwarber in Boston: A 2021 Preview

Some called it the greatest MLB Trade Deadline of the generation. Stars and generational talents tattooed the headlines last week as big names flew all over North America switching teams. The Red Sox, one of the best storylines of 2021, were expectedly to be in the buyer mix and they made their primary splash on Thursday. With less than 18 hours left on the clock, Chaim Bloom pulled the trigger on one of the prolific power hitters of the season, Kyle Schwarber.


Here, we break down what went into the acquisition, the impact Schwarber can have in his role with the Red Sox, and why this was the move for the Red Sox to make in a ludicrously active market. 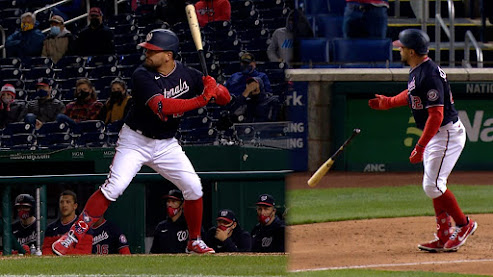 Kyle Schwarber, who made his MLB debut in 2015, quickly rose to fame as a powerful component of an elite Cubs offensive core. At age 22, he hit at an .842 OPS in 69 regular season games and in his first postseason run that year, he mashed 5 home runs with a 1.308 OPS in the Cubs' 9 October games.
The future looked bright for one of the game's rising offensive stars until 2016. That year, Schwarber only played in two games before suffering a gruesome injury that kept him out for the remainder of the regular season. In what was one of the most exciting stories in October, Schwarber made his return to the Cubs roster in Game 1 of the 2016 World Series and became the first ever position player in MLB history to notch his first hit of the season during the Fall Classic. He finished out the curse-ending 7-game series hitting at a .971 OPS, including 3 hits and a stolen base in Game 7. It was clear that Schwarber was built to compete at the biggest stage and despite an underwhelming season in 2017, he came back to play 137 games in 2018 and put up an .823 OPS and sneakily led the league in intentional walks (20).

After an even better 2019, Schwarber was humbled a bit in a reckless 2020 where several star hitters, including J.D. Martinez, saw their numbers plummet. Schwarber finished the season with career-lows across the board and his .188 batting average was the lowest by a qualified MLB hitter. That winter, he was non-tendered by the Cubs and in January of 2021, the Nationals signed him to a one-year contract with a mutual option of 2022.

Kyle Schwarber just hit a 463-foot walkoff for his first home run with the Nationals 👀 pic.twitter.com/P8MzNV2iI3


What looked like a low-risk move for the Nationals also looked low-reward early in the season. Through his first 51 games, Schwarber was hitting at an unimpressive .716 OPS, striking out 63 times and drawing only 22 walks. He did have 9 home runs, however, two of which were of the walkoff moonshot variety.
On June 12, a switch was flipped—for what seemed like the rest of the season. Schwarber turned his whiffs into loud cranks. Since that date, he leads all MLB hitters (minimum 80 plate appearances) in barrel rate (34.0%), OPS (1.383), wRC+ (246), and ISO (.636). Despite being out with an injury for now over a month and still not being able to make his Red Sox debut, he has the second-most home runs in baseball since that June 12 date with 16 in just 88 plate appearances. Schwarber’s insane streak earned him NL Player of the Month honors in June and at the time of his injury, he still wasn’t showing any signs of losing a beat with that power swing.


Simply put, what the Red Sox got was one of the best power hitters in all of baseball in 2021 and perhaps the single best hitter available by trade.

The Cost: Balling on a budget

The Red Sox were linked to many names ahead of the trade deadline, unsurprisingly so given Chaim Bloom’s continued willingness since being hired to improve the roster in every department—not just the bullpen where he has accumulated most of his reputation.
The issue? When there’s over ten other teams looking to buy for the present and several of them have better resources to exchange for elite talent, the going gets tough and the choices get slim. In what was clearly the year of the seller. To understand how much so, all you have to do is evaluate returns for names such as Max Scherzer and José Berríos. The Red Sox were given no shot of competing this those offers.

In case it wasn't clear, it was a seller's market. #MLBTradeDeadline pic.twitter.com/dGeqB1xOTZ


Luckily for the Red Sox, they got themselves the power bat they needed without emptying the tank in the farm—simply because competitor buyers such as the Yankees (acquired Anthony Rizzo) and the Cubs (acquired Kris Bryant) had to get immediate help rather than wait for the return of Schwarber.
The Red Sox holding the division lead at the time of the deadline allowed them the chance to buy low on Schwarber via just one prospect—Aldo Ramirez, a pitching prospect ranked #22 on the Red Sox prospect ranking entering 2021. At just 20 years old, Ramirez was feasting on the competition at Low-A Salem, posting a 2.03 ERA with 9.3 K/9. In Ramirez, the Nationals are getting a strike-thrower with absurd command and a ceiling still on the rise. Still, the Red Sox will be pleased to make a run for an AL Pennant in 2021 thanks to adding one of the most feared bats in baseball.

It should be clear that the Red Sox have built a very good team, built for competition for a long time, with what Chaim Bloom has done in his short tenure in Boston. Despite a rough stretch to transition into August, the Red Sox are poised for a playoff position and are firmly in the mix to win the AL East. With a top 5 pitcher in MLB (Chris Sale) coming back to full health very soon, the addition of Schwarber, and the return of "Captain Clutch" Christian Arroyo, the Red Sox have put themselves in a spot that many would have laughed at the idea of during spring training.

So where does Kyle Schwarber fit into the mix given the Red Sox’s weaknesses? With Schwarber still on the injured list, the answer is not yet official. Some have him slotting in the outfield with platoons on the horizon. Others have him as the everyday first baseman going forward despite having 0 fielding opportunities at the big league level there. Others want J.D. Martinez, who has himself some sweet defensive highlights this season, to play left field more regularly so that Schwarber can take over as the primary designated hitter. Oh and don’t worry—I see some of you thinking outside the box and throwing Schwarber, who was drafted as a catcher, behind the plate.

Bloom on Schwarber returning to his prospect role as a catcher -- 'We haven't talked about that. We did talk about the first base thing.'

'We like our catchers. I wouldn't rule anything out.....but I would not anticipate that as a regular option.' #RedSox


For me, there’s really only one correct route to go here. Let’s rule out the crazy ideas first, shall we? You absolutely do not rely on Martinez to be your permanent left fielder—at 33 years old, he’s not going to learn to be an above average defender for the remainder of the season. You absolutely do not throw Kyle Schwarber behind the plate. He’s here for his offense and adding an added dimension of being a game-caller and thrower can take a toll on his mental state at the plate and his health overall. The Red Sox carry four catchers on their 40-man roster (Christian Vázquez, Kevin Plawecki, Connor Wong, Ronaldo Hernandez); Schwarber was not acquired to be the fifth, regardless of how poorly the catching position is hitting.

Instead, Schwarber should aim to be Edition 2.0 of well-known Red Sox hero Mike Napoli, who was also a catcher before playing first base for the Red Sox during their 2013 championship run. Already reportedly picking up the position during his IL stint, Schwarber’s health is in the least jeopardy when he is starting at first base instead of being okay with Bobby Dalbec or forcing Christian Arroyo or Franchy Cordero into the job again. With Dalbec being of the most unreliable bats of Boston’s lineup, especially against right-handed pitching, the decision should be even easier.


Kyle Schwarber is Boston’s new first baseman. Due to his experience primarily as an outfielder, play him in left field when you need to. When that happens, slot in your backups at first base—Marwin Gonzalez, Bobby Dalbec, etc. And when Schwarber is in the outfield, continue to optimize your currently-elite outfield defense and play him in left field so that Alex Verdugo/Enrique Hernandez can continue to own center field and Hunter Renfroe keeps doing his thing in right field with that range and arm.

Lastly, an exercise that I’ve long been a fan of. A new-look lineup in the works? What shall it be? For starters, the Red Sox will need to figure out who goes back down to AAA as bodies become healthy for the major league roster. You have to assume Franchy Cordero is first in line to be sent down. Is Jarren Duran next in the queue given his strikeout issues and excess left-handed bat? 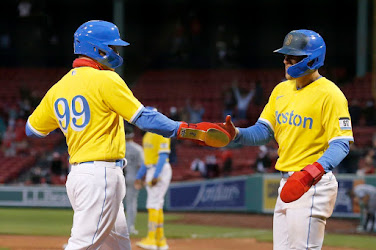 (Photo: AP Photo/Mary Schwaim)
Still, Schwarber is no pure platoon bat. He’s the most experienced, productive hitter among all Red Sox options. Enough with the automatic outs. Even against left-handed pitchers, Schwarber needs to be in the lineup and simply shifted around in the order by Alex Cora (barring off days). Below, I’ve suggested two versions of a "regular" Red Sox lineup, assuming no scheduled rest day for a regular.

While the standard might be to continue rolling with Enrique Hernandez at the leadoff spot where he is red-hot at the moment, Alex Cora might choose to prioritize Schwarber’s comfort zone instead. It was at the moment that Schwarber became Washington’s everyday leadoff man that the bat began to spit lava. This season, Schwarber has posted a .338 batting average, 1.390 OPS, 247 wRC+, and 16 of his 25 home runs when leading off. The rest of the lineup construction here is just management of lefty-righty splits while still keeping hot bats in the 7 and 8 spots.

On the contrary, when the splits aren’t in his favor, Schwarber is much better served as a threat to place in front of the lefty killer Hunter Renfroe. Still in the middle of the order, Schwarber should see a ton of at-bats behind the Red Sox championship trio of Devers, Martinez, and Bogaerts. Yet again, we’re playing the game of distributing handedness throughout the lineup. By batting Hernandez leadoff, we allow for flexibility to flip-flop so that Cora doesn’t have to watch back-to-back lefty at-bats against a left-handed pitcher.
Do you agree with the lineup? What do you think Kyle Schwarber's impact will be in Boston in 2021 and possibly beyond? Predict those statlines below!
Follow the author at @AhaanRungta, listen to his sports podcast, subscribe to his baseball YouTube, and read more Red Sox content here.