"THE ULTIMATE WALK OFF!" 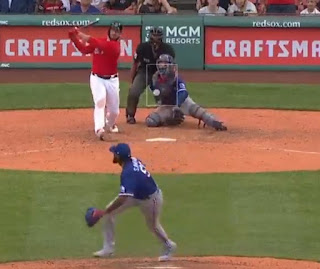 That was how NESN color commentator Dennis Eckersley described Travis Shaw's grand slam (pictured) in the bottom of the 11th inning that gave the Red Sox an 8-4 come-from-behind win over the Texas Rangers Monday afternoon at Fenway Park.

Garrett Whitlock was the winner with 2.2 innings of relief of Matt Barnes who imploded in the top of the ninth inning, allowing two runs as Texas tied the score 3-3.

Nathan Eovaldi started for Boston and served up seven strong innings, holding Texas to one unearned run on just four hits. He struck out seven and didn't walk a batter.

Alex Verdugo provided Boston with an early 2-0 lead with his 12th home run of the year. Hunter Renfroe added a solo home run in the bottom of the sixth and Eovaldi appeared to be well on his way to the win.

The teams traded runs in the 10th with Rafael Devers crushing a two-strike, two-strike double to the 420 sign in center to tie the game at 4-4.