Positions the Red Sox must strengthen to compete in 2022

The Boston Red Sox made a surprise playoff appearance in 2021, but the Fenway Park faithful may have been underwhelmed in the early months of the Red Sox offseason. Boston was quiet before the lockout, and saw Eduardo Rodriguez depart for Detroit.

Boston Red Sox current odds show how much work Chaim Bloom and co need to do. There are 10 teams with shorter odds to win the World Series in 2022, and most projections place them as the fourth-best team in the American League East as their roster currently stands.

The rotation has already been added to with Rich Hill, James Paxton and Michael Wacha arriving on low-price deals. Hunter Renfroe was traded to the Brewers, and it’s unclear what the future holds for free agents Kyle Schwarber, Hansel Robles, Travis Shaw and Adam Ottavino.

Let’s look at three positions Boston must strengthen to be seen as serious contenders next season.

Jeter Downs was projected to arrive in the big leagues by 2022, but that looks unlikely after a .606 OPS in Triple-A. Boston’s infield leans on Kike Hernandez, Xander Bogaerts and Rafael Devers for now.

Hernandez was primarily an outfielder in 2021, however. If he’s in left for most of the games in 2022, the Red Sox need an everyday infielder to join the Major League roster. Ultimately, they need at least one everyday bat. It can be argued they need one or two more than that, though Bobby Dalbec’s strong end to the season might have earned him a couple of months as first choice. 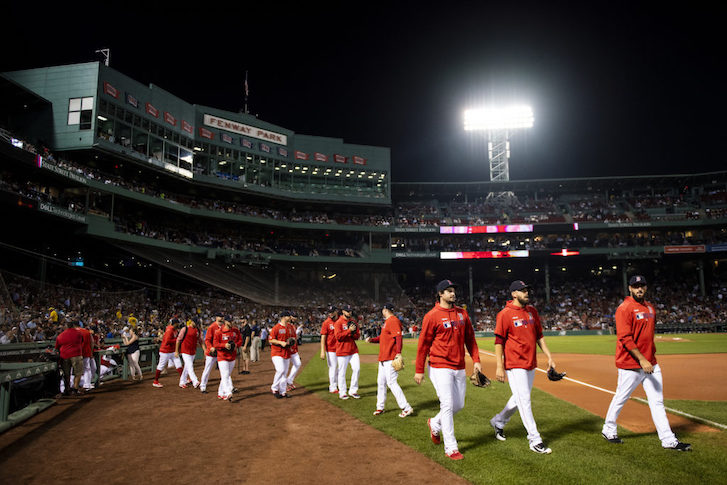 Boston’s bullpen was third in wins above average last season. That included 69 appearances for Ottavino, who is a free agent. Re-signing Ottavino on a one- or two-year deal would be ideal for the Red Sox.

Even if they do that, Bloom should continue to add relief arms. Brad Hand, Collin McHugh and Tony Watson could bring experience or Boston could look for high-upside projects like Reyes Moronta.

The Red Sox had a great relief group last year, but they could benefit from adding to it. Replacing Ottavino’s workload is a stern task, and it can’t hurt to build around the core of Garrett Whitlock, Ryan Brasier and Josh Taylor.

Losing Renfroe and potentially Schwarber leaves a hole in the outfield. Jackie Bradley Jr has returned to man center, and Alex Verdugo has proven to be a solid Major League player, but Boston needs more offense from its outfield.

Several of the top outfielders are already off the market with Starling Marte, Avisail Garcia, Mark Canha and Chris Taylor penning pre-lockout pacts. The Red Sox still have options, though, ranging from the expensive like Nick Castellanos to bounce back candidates like Tommy Pham.

Getting a right-handed bat in the outfield would be helpful, though it could be worth taking a chance on the lefty power of Eddie Rosario and Joc Pederson. Both hitters crush right-handed pitching.