Get info on the latest Boston Red Sox games 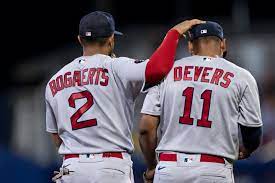 In the modern era of sports plenty of games are spread out on a wide range of broadcasters. There is not one sole television channel which features all sporting events. Therefore it can sometimes be difficult for people to find the right TV station or streaming site. If they are struggling to understand the schedule for MLB Games today then they can check out the website Livesportsontv.com.

It allows people to create a schedule which highlights the MLB games which specifically feature the Boston Red Sox. This league is mainstream but that does not mean that everyone will be able to easily find places to watch the games. The programming schedule available on Livesportsontv.com will ensure that Red Sox fans never miss their favorite team.

The 2023 season is sure to be an exciting one for anyone interested in Major League Baseball. The chances of the Boston Red Sox excelling are up in the air. However, those who love this team will want to watch them perform even if they do not do particularly well. The team could end up surprising punters by making a comeback. In order to watch this happen in real time fans will need to know where the games are being shown. Livesportsontv.com is the ideal resource for staying informed.

One of the great things about this site is that it is available on multiple devices. MLB fans can get live updates on Red Sox games through their computer, tablet or smartphone. There is even an app available to download. As a result there is an added layer of portability to the programming schedule. After checking out the dates of upcoming MLB games the user can read news articles related to their favorite team. There are weekly updates on Livesportsontv.com so that readers will stay informed about important changes to the world of baseball.

The Sox Are in Dire Need Of Improvement

The Boston Red Sox will be eagerly anticipating a return to form after a disappointing 2022 season. Despite some solid management from Alex Cora the team finished in last place in the American League East division. They ended on a 78–84 record.

Recently Brendan Campbell, Mike Carlucci and Avery Hamel have stood out as players to watch out for. Meanwhile the contract status of Michael Wacha, Xander Bogaerts and Nathan Eovaldi is uncertain. Their roles as Red Sox teammates are due to expire in the off-season.

2023 will mark the 123rd MLB season for the Red Sox. Cora is likely to return as manager. During early games last year his style tended to favor the bullpen over offense. This made them difficult to figure out.

MLB viewers will have to wait until late March to see the Sox back on the field during the regular season. They are set to compete until October. This will give fans plenty of opportunities to watch broadcasts of their favorite team in action. If they are struggling to find a channel or stream for MLB games they can use Livesportsontv.com.