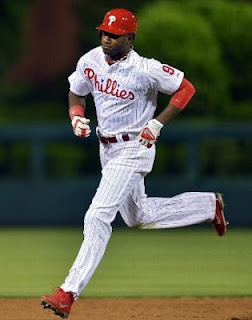 It was the same exact ending, against the same exact team, in a different city. The Red Sox tried to mount a comeback against Jonathan Papelbon but it fell short in the end for the second straight day. The Phillies were lead by power hitting that downed the Red Sox. Here are the 3 stars of the game:

Star 3: Kyle Kendrick
Kendrick pitched well for 6 innings before handing the ball over to the bullpen for the rest of the game. He gave up 2 runs on 4 hits while throwing 100 pitches. He struck out 3, walked 3 and gave up a home run.
Star 2: Ryan Howard
After the Red Sox got off to a hot start in the first inning Howard quickly responded with a solo home run in the second inning. Howard went 1-4 with 1 RBI and 1 run scored.
Star 1: Domonic Brown
Brown was the Phillies offense, having a 2 home run night. He went 2-4 with 2 RBI's and 2 runs scored. Its a safe bet to say that without Brown the Phillies would not have won the game.

Well the Red Sox have one more game against Philadelphia before traveling to New York for a 3 game series against the Yankees. If the Red Sox can win tonight they will have a little bit of much needed momentum going into this next series. Whats the gameplan for you against the Yankees this weekend? Leave your answer in the comments below or on twitter @ryanthahawaiian.