Then and Now: Jon Lester 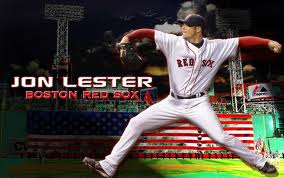 2012 is a year that most fans and Red Sox players wish they could permanently erase from their memories for so many reasons. The mindset of everyone in Boston was that this 2013 season would be a fresh start with a clean slate to start the year and hoping that there would be no overlap between last season and this one.

Jon Lester is no exception to that thought having the worst season as a professional pitcher in his career. In 33 starts last season Lester went 9-14 posting a 4.82 ERA which was the highest of his MLB career. Opposing hitters had a field day with Lester in 2012 scoring 110 runs, blasting 25 home runs and hitting at a .273 average against the lefty. All of which were career worsts for Jon, he also only had 166 strikeouts on the season another career low. By now you should be seeing the theme that I'm going for. Fans were just as disappointed in Lester as he was in himself;


“I think the biggest thing for me to prove is that [2012 was] a fluke, that I’m still an effective pitcher in this league,” he said. “And then the team, yeah, we need to get back to being the Boston Red Sox and kind of doing the same thing, prove that last year was a fluke for us and a blip on the radar and come in and play better baseball and do the little things right and I think we’ve done that, so far.”

Next chapter begins, 2013 the return of John Farrell and addition of pitching coach Juan Nieves. Out goes the beer & chicken season, in comes hard nosed well coached baseball. Under these coaches the entire pitching staffed has thrived especially Jon Lester who is off to one of the hottest starts in the league. In 9 starts this season he is 6-0 with a 2.27 ERA and opposing hitters are down to a .204 average against the rejuvenated lefty. That controlled, power, left handed arm has been firing those pearls off the mound as well as he ever has for us in a Red Sox uniform and it is truly a thing of beauty. Lester recently spoke about what he's been throwing this season and what's been working for him.


“I think the biggest pitch for me this year is my changeup, just with how effective it’s been, how consistent it’s been. I think that’s been the main thing with it. And without having that breaking ball it’s been able to slow guys down enough to get in on them with my fastball or cutter.”

Strong coaching, work ethic, and all around rejuvenated spirit has allowed Lester to get back to what he does best. Dominate on the mound. Tonight Lester looks to continue his strong season in Chicago against the White Sox where he is looking to earn his 7th victory of the season. After reading those quotes from Jon I know when I watch him tonight I will be focusing my attention on his pitches and where he works them during each at bat. First pitch tonight in Chicago is at 8:10pm, tune in with me as we watch Lester continue his dominant season.