Felix Doubront had nothing, the Red Sox offense only a little more, and the resurgent Yankees came away with a 10-3 win last night in the opener of a three-game series at Fenway Park. The loss was the third in a row for Boston and the sixth in the last eight games. 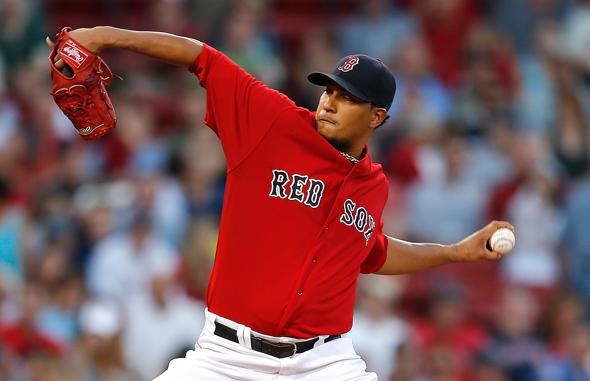 The Yankees scored in each of the first four innings. Doubront (pictured) gave up seven runs over four innings on eight hits, two of which were home runs.

For their part, the Red Sox were simply sloppy, committing three errors and having three runners thrown out on the bases.

Alfonso Soriano continued his hot streak with three hits in four at bats including a home run, his fifth in his last four games.

Dustin Pedroia and Stephen Drew each had two hits for Boston who left a combined twelve men on base.

As expected, Yankees third baseman Alex Rodriguez - not exactly a Fenway fan-favorite to begin with - was booed continuously throughout the game, following reports that people close to him lead information on players involved in the Biogenesis scandal.

The Red Sox saw their lead in the American League East drop to one game; John Lackey will have the task of trying to stop the bleeding Saturday afternoon.