Living overseas and following the Boston Red Sox has its challenges.

We wake up in the morning having been unable to watch the games live in the middle of our night wondering if they have won or lost. We are afraid to look, wanting a win, dreading a loss that will start our day off on the wrong foot.

This has been our life the last 11 games. Waking to more losses than wins as we watch their lead in the division slowly shrink down to the current one game lead over the Rays.

Watching the Red Sox slowly falling over against left handed pitching, adding last night to the pile which makes it 2-7 against southpaws.

With the Yankees in town I was looking forward to the Red Sox pulling it together, booing A-Rod-dope-head, and putting some wins on the board.

Nothing was further from the truth last night.

Today has not been a good day.

The Red Sox had to face another lefty, got 6 hits and 3 runs off him in 6.2 innings. The rest of the game they were only able to add 4 more hits to the total. They left 7 runners in scoring position, only converted 3 of 8 with runners in scoring position, and had 3 errors on the night. There were runners picked off and base running errors along with the lack of hitting. I won't even mention the details of the pounding that Felix Doubront endured in a short 4 inning start. 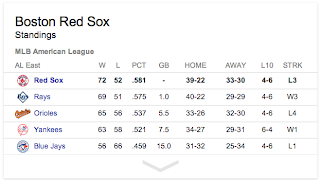 We are left asking ourselves what is going on?

The Rays are within 1 game in the division, the Orioles are fading at 5 and 1/2 games back, and them damn Yankees are 7 and 1/2 games back which is the closest they have been since July 29th. These are the games to put some distance between you and your direct rivals. 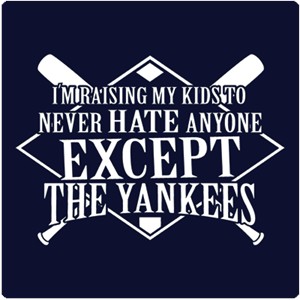 When are the Red Sox going to wake up and bust out?

Will the hitting against lefties pick up or will the Red Sox fade from the division race?

We here overseas think that enough is enough. We think 10 days of watching this is enough. Tonight they face a right handed pitcher in Kuroda against the Yankees, so time to bust out and ruin this guys 1.74 ERA.

The Overseas Fan will be staying up tonight to watch the game live. John Lackey needs to bring his A game, the rest of the Red Sox need to bring their bats. Enough is enough, we will be booing A-Rod-dope-head, pulling for Lackey, and wishing the Yankees the worst.

Disliking the Yankees has no borders... game on.