Farrell to not tinker with roster 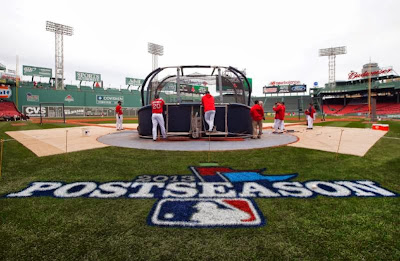 It looks as if manager John Farrell is happy with the 25 man roster that he had for the ALDS against Tampa Bay, as he will not be changing it at all for the series against the Detroit Tigers. One of the major questions that Farrell had to answer before the ALDS was the choice to include Franklin Morales to pitch out of the bullpen instead of putting Jackie Bradley Jr. on the roster. One would think that it would be more important to carry more pitchers on the roster for a 7 game series than a 5 game series so it was interesting for JBJ to not be on the roster for the ALDS. Both Ryan Dempster and Franklin Morales pitched out of the bullpen in the ALDS and were not extremely effeciant. It could easily be said that Morales was the worst pitcher the Sox had in the ALDS, pitching only 1/3 of an inning while allowing a hit, run and a walk. Dempster pitched 1 inning of relief and allowed only 1 hit.

I like that Farrell is going with an "if it aint broke, dont fix it" approach. The next question that will be asked of Farrell will be if he will alter the starting rotation, a rotation that was: Lester, Lackey, Buchholz, and Peavy. No matter what Farrell decides to do, I for one will not question him. He got this team to the ALCS and oversaw the transformation that the team had from last year to this year, the team is in your hands Farrell do as you see fit.