Getting to the Tigers weak spot 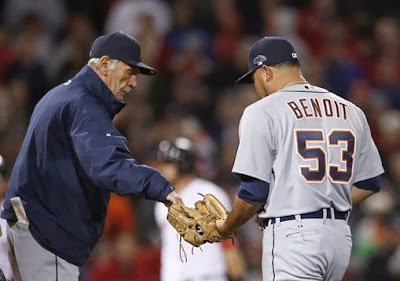 It is safe to say that the image above may be the point when the Red Sox season was saved, thank you Leyland and Benoit. In game 1 of the series the Red Sox struck out 17 times, and had 1 hit. This hit came against Benoit in the 9th inning. Last night the Red Sox were being no hit into the 6th inning and were losing 5-0 before Shane Victorino and Dustin Pedroia combined for back to back hits and got the Sox on the board for the first time in the series. Scherzer pitched a fantastic game for the Tigers, going 7 innings, allowing only the 2 hits, 1 run and struck out 13 Red Sox.

The bullpen is the weak spot for the the Tigers. They had a 5-1 lead in the 8th inning then proceded to load the bases and then David Ortiz does what Ortiz does. The question is how to the Red Sox get to the Tigers bullpen. The Sox have done a good job against the Tigers bullpen the last two days, but they are knocking the starters out of the game late. The key to knocking the starters out of the game earlier would have to be get hits early. On Tuesday the ball will be handed over to Justin Verlander and he will look to be dominant just like the other two starters Detroit has already thrown. Against Verlander the Red Sox have to be patient, and jump at the opportunities that they are given. Working the pitch count will be important too, if they are able to get Verlander to average between 15-20 pitches through the first 5 innings he will be between 75-100 pitches. If he is closer to the higher end of that number it will be likely that Verlander goes only 6 and then has to hand the ball over to the bullpen.

To beat the Tigers we have to beat the bullpen, but we have to make the starters work a lot harder than they have been. Striking out 13 times against a starter is way too many. Taking the bats off the shoulder will be important. What do you think the key is for getting to their starting pitchers, or their bullpen? Leave your answer in the comments section or on twitter @Ryanmacleod92.
Unknown10/14/2013 05:00:00 PM
Share
Newer
Older