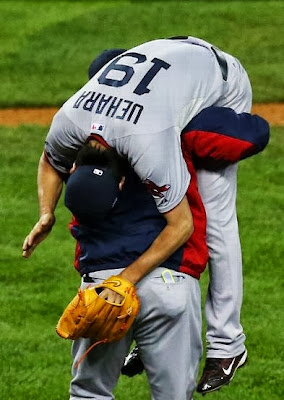 The Boston Red Sox are 1 win away from returning to the World Series for the first time since 2007. On Saturday the Red Sox return to Fenway Park looking to beat Scherzer and punch their ticket to the Fall Classic. Here are some of the keys to winning Game 6.

Start Xander Bogaerts:
In Bogaerts first start in the Postseason, he produced more than anyone could have imagined. He took the spot of Will Middlebrooks, and went 1-3 in 4 plate appearances. He hit a double in the second inning then came around to score, giving the Red Sox the 3-0 lead. Bogaerts has proven that in 1 start this series that he is more valuable at the plate than Will Middlebrooks. Its time to keep Middlebrooks on the bench and let the "X-Man" play.

Make contact early:
In the first 2 games of the series the Red Sox were not seeing the ball well early in the game, allowing Detroit starters to get into a groove and shut down the Red Sox bats. In games 3 and 5 the Sox saw the ball much better, getting hits early in the game and not allowing the opposing starter to get into a rhythm and as a result the Sox got on the board early, and often, specifically in game 5.

Clay Buchholz pitches 5 innings:
In game 2 of the series Buchholz pitched 5 good innings against the Tigers offense, allowing only 1 run, but in the 6th inning he struggled, allowing 4 more runs putting the Sox in a 5-0 hole. Buchholz is not the dominant pitcher that started the season for the Sox, he still is recovering from the injury that sidelined him for 3 months during the regular season. Buchholz typically gives 5 strong innings then it goes downhill. Farrell needs to realize this and hand the ball over to the bullpen, a bullpen that has been very good all postseason.

Do not let the umpire beat you:
In Game 2 the Red Sox struck out 15 times, 13 of these coming against Scherzer. After 5 games in this series the Red Sox hitters should know that the strike zone has not been consistent, and if the ball is anywhere close to the plate that they need to swing to protect. Nothing frustrates me more than seeing the Red Sox continue to strike out looking and then argue with the home plate umpire. Yes the calls may be inconsistent, and extremely frustrating, but it is something that this team should have come to expect. The calls go both ways, while it may seem like they haven't. Take the bats off your shoulder and protect the plate, do not let the ump ring you up too often and then complain about it.

During the RedSoxLive show we did on Tuesday I predicted that the Sox would win in 6 games, coming back to Fenway on Saturday this looks like a very likely possibility. Above are what I think are the most important keys to the game, do you have any others? Leave your keys to beating the Tigers in Game 6 tomorrow in the comments below or tell me on twitter @Ryanmacleod92.