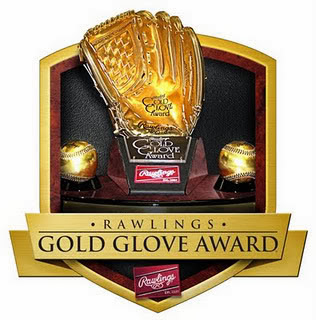 While the Boston Red Sox are just a win away from winning the biggest piece of baseball bling - the World Series trophy - teammates Dustin Pedroia and Shane Victorio added some gold to there collections.

Pedroia led all second basemen with 15 Defensive Runs Saved (a fancy sabermetric calculated on the ability of a player to turn batted balls into outs and convert double plays, relative to their peers). Pedroia's .993 fielding percentage (5 errors/688 total chances) ranked second among AL qualifiers at second base.

Victorino had 24 Defensive Runs Saved in right field, the most he’s had at any position in a season in his career. Victorino also had the third-most putouts among AL right fielders (264) and his three double plays tied for second-most. Victorino’s throwing arm also provided significant value. His nine outfield assists tied for the AL lead among right fielders.

This was Victorino’s fourth Gold Glove, but his first as a right fielder. He previously won three with the Phillies, all as a center fielder.

Here’s the complete list of 2013 Rawlings Gold Glove winners from both leagues.