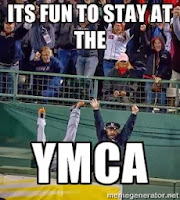 5. Jarrod Saltalamacchia's walk-off single in Game 2 - If this was any other series on any other team a moment like this would ordinarily rank number one. However, the Red Sox are anything but ordinary. In game two Salty came through in the clutch as he hit a walk-off single in the ninth to score Jonny Gomes from third, but it only ranks number five on our list of 'Top 5 Red Sox Moments in the 2013 ALCS.'

4. Mike Napoli's solo home run in Game 3 - In game three ONLY one run was tallied and that was a Mike Napoli solo home run. I'm not sure what Verlander said to Napoli's beard, but it was enough to awaken The Siesta and the rest, as they say, is history.

3. David Ortiz's game tying grand slam in Game 2 - Boston's postseason Magic Man (not to be confused with Jose Magic Hands Iglesias) delivered another memorable Red Sox moment when he hit a game tying grand slam in the 8th inning of game two. That hit not only gave Red Sox Nation a talking point at the water cooler the next day, but it also gave way to one of the greatest MLB postseason pictures EVER - just watch for the Boston Police officer at the end of the GIF.

2. Shane Victorino's grand slam in Game 6 - As soon as Victorino destroyed that ball everyone in Red Sox Nation screamed (at their TV or at Fenway) the same thing, "Welcome to the ALCS, Shane!" If Victorino was waiting for the right moment to strike he couldn't have picked a better time. In the words of the immortal Bette Midler, "Did you ever know that you're my hero?!"

1. Koji Uehara strikes out Jose Iglesias to end the game and the series - What more could you ask for from your closer? He comes in (sometimes with 5 outs to go), he throws strikes and he closes out games (and series). Koji deserved to win the ALCS MVP, and that's why he's number one on our list of 'Top 5 Red Sox Moments in the 2013 ALCS.'