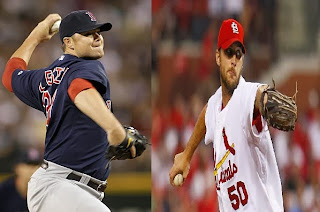 We know that the Red Sox will be facing the St. Louis Cardinals for at least 4 games in the World Series, starting Wednesday. What we do not yet know is the pitching match-ups. At the time of this being written only one starter has been announced, Game 1 for St. Louis will be Adam Wainwright. Here are my projected match-ups;

These pitching match-ups could go either way, it all depends on how the managers decide who they want their teams to face. These are projected match-ups with the only announced starter being Wainwright for the Cardinals in Game 1.