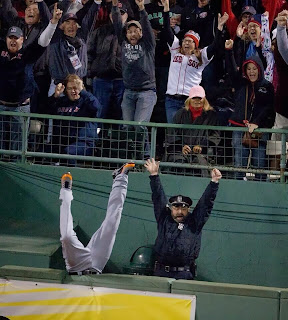 It took just 24-hours for Mr. Torii Hunter to go full-on beast mode against the man who he believes left him hanging - upside down or was it right side up - in the Red Sox bullpen.

By now the entire universe has been privy to the events that took place on Sunday at Fenway Park when David “Big Time Papi” Ortiz hit a grand-salami to tie the game at five. You know what, perhaps you’re not a sports fan but rather a connoisseur of great writing (thank you very much), so allow me to transport you to a time when strife, unpaid bills and relationships issues took a back seat to the magnitude of this one incredible moment.

Seriously, this is AWESOME!

Forcing yourself past the fact that Ortiz hit a game tying grand slam, you probably noticed that Detroit Tigers outfielder Torii Hunter took a little tumble over the bullpen wall. And if you look even closer you can clearly see Boston police officer Steve Horgan, stationed in that very bullpen, celebrating with the Fenway Faithful. A prisoner of that very special moment – thank you for allowing me to use a fantastic situational pun.

Well, according to Hunter that just wasn’t cool, bro.


"He's supposed to be protect and serve. This son of a gun’s got his hands up! Help me, then cheer, fool!" "I wish I would have kicked him in his face." Hunter said jokingly.


Hunter did take a moment to sincerely thank those in the Red Sox bullpen that did help, but not without taking another light-hearted jab at Officer Horgan.


"They tried to take care of human life. Unlike the cop."


Let's just set Mr. Hunter straight on a couple of key issues regarding the said offense. After which I'm sure my explanation will untangle his delicate panties that seem to be in a twist.

You're playing a professional baseball game, you're not in a bar fight.

Say what you want Torii, but the job of Officer Horgan is to protect you from the Fenway crowd not Fenway Park itself. You tried to make a baseball play - and a hell of an attempt at that - but you just couldn't pull it off. Remember, you were playing baseball not fleeing for your life from some late night tomfoolery.

Officer Steve Horgan is a prophet!

If you replay the video it's easy to see that Officer Horgan was celebrating before Hunter ever hit the wall. A fact that upon further review is indisputable. Hunter should've taken the Ron Burgundy route and said, "I'm not even mad, that's amazing."

Let's be honest, Hunter is just mad the Tigers were beat by the one guy capable of doing so, David Ortiz. As a matter of fact you have every right to be mad, but project that onto your manager or your teammates. Don't take your frustration out on a police officer. THAT'S not cool, bro.

In the words of the NFL Countdown Show, "C'mon man!"